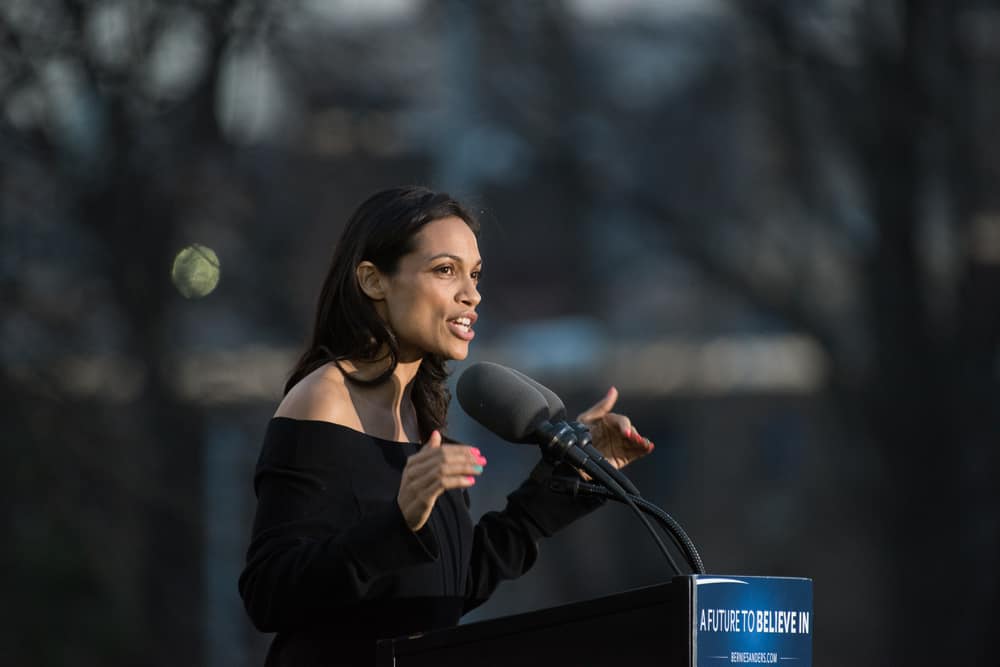 Most famous for: Her roles in films such as Rent, Seven Pounds, and Sin City

How she got connected to food: Dawson attributes her itch for activism to her mother, who was always attending rallies and marches for progressive causes. By the age of ten, Dawson was taking up causes of her own. “My very first campaign was to save trees when I was ten years old,” she says. “I made a bunch of posters because I wasn’t thinking about it so clearly.”

What she is doing about it: Producing and narrating documentaries, teaming up with organizations who are experts in the field of sustainable agriculture and encouraging her followers to start growing their own food

Food project(s): While Dawson is no stranger to environmental philanthropic causes (she is involved in charities including Global Cool, Conservation International, National Geographic Society and The Nature Conservancy, to name a few), she has gone full speed ahead in her advocacy for a more sustainable food system.

In 2018, she executive-produced and narrated The Need to Grow, a documentary based on the premise that we have only 60 years’ worth of farmable topsoil left on earth. The documentary follows three  activists–an eight-year-old girl, a renegade farmer and an accomplished visionary inventor–as they fight for change in agricultural food production. The documentary calls for nothing short of a revolution and offers individuals ways to help regenerate the planet’s dying soils and support the restoration of earth’s resources.

And just last year, in 2019, she teamed up  Kiss the Ground, an education and advocacy nonprofit working to reverse climate change through regenerative agricultural practices, and Green America, the nation’s leading green economy organization to encourage people from all over the United States to begin their own climate victory gardens inspired by those planted during the World Wars.

According to Kiss the Ground, by 1944, almost 20 million victory gardens produced eight million tons of food, equaling more than 40 percent of the fresh fruits and vegetables consumed in the U.S. at the time. By growing food at home, farm-raised food was made more readily available for the troops stationed abroad. Today’s victory-garden campaign aims to build more healthy soil while combating climate change. Using regenerative practices for gardening–no-till, no chemicals, composting–can mitigate carbon emissions and even sequester carbon into the soil while growing non-toxic, nutrient-rich foods.

“Climate Victory Gardens are a great way for the 35 percent of Americans with home or community gardens to engage on the issue of climate change. With simple techniques your garden can play a meaningful part in reversing climate change,” said Rosario Dawson. “Regenerative gardening is not about being ‘sustainable,’ it’s about rebuilding and restoring the health of our soils while we grow food. It’s a different way of thinking.”

Dawson told The Washington Post that she was considering going back to college to “learn regenerative farming and soil practices to capture carbon.”

Interesting stories about Rosaria Dawson and her food projects in online media:

Chefs Who Cook Well and Do Good: Alejandra Schrader