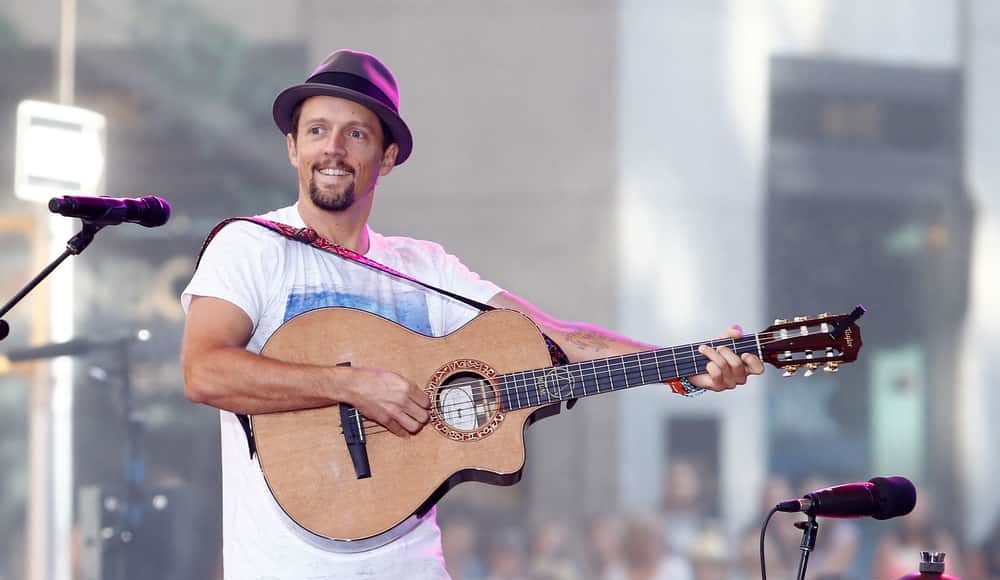 Most famous for: His international hit “I’m Yours,” which peaked at number 6 on the Billboard Hot 100 and then spent 76 weeks on the chart–a record at the time.

How he got connected to food: ALthough his diet and lifestyle may appear to be optimal right now, that was not always the case for Mraz, who for years living off fast food, beer, and cigarettes.

“I grew up on fast food. My parents were divorced… So, even though my mom would always make dinner, I spent most of my time with my dad. He’d pick up different fast food for dinner every night. And now that my dad is in his mid-60s, he, unsurprisingly, doesn’t have the best health. He’s getting ready to have surgery; he’s limited in what he can do… My dad wouldn’t be in this situation if we’d had better options and education around food. That’s what motivates me: educating other families on how to be healthier,” says Mraz.

It was only after purchasing a house that Mraz began to notice how much food waste he was producing and the impact he was having on the land. That’s when he transitioned to a health-conscious life and became an avid grower of his own food In 2006, he started his own small garden, which grew and grew each growing season, until it was part of a much larger farm operation.

“It started by accident, to be honest. In 2004, I bought a house in San Diego that just so happened to have an avocado farm on the property. I didn’t want to farm — I still ate fast food, drank beer and smoked cigarettes. I just wanted to be weird out in the country…I didn’t intend to become a farmer,”  Mraz explained.

He also attributes his practice of gratitude and mindful eating to his strong connection to food.

“If we sit down at our meal and we say thank you, thank you to the farmers who grew this food; thank you to the distribution team that managed to get it to a farmer’s market, to our store, to our table; thank you to the microorganisms under the soil whose precious life matter to make the food grow. What that does is that it increases your awareness about obviously what you have and what you have to be grateful for, but what’s in front of you, and where your food comes from,” says Mraz.

What he cares about: Local food systems; regenerative and sustainable agriculture; soil health and ending hunger

What he is doing about it: Growing his own food and, by example, encouraging others to do the same; practicing mindful eating; donating funds to anti-hunger relief organizations; and advocating for better soil health

Food project(s): Mraz jokes that he is a farmer who records music on the side. He helps operate Mraz Family Farms in Oceanside, California, where he produces 60,000 pounds of avocados every year. The produce travels locally to restaurants or grocery stores.

Though he isn’t quite turning a profit on the farm, the practice of growing food has positively impacted his life and even his music. Mraz’s song “Back to Earth” is all about farming.

“There’s something that each one of us can do to supplement our own grocery bill whether it’s in a pot or in our backyard garden patch,” Mraz said. “I think it could be a real reawakening in how we view agriculture,” Mraz said.  “I think there will be a lot of people planting their first gardens ever, which I think is a beautiful thing.”

Mraz says he is also learning to listen to the land and understand the conditions necessary for growing food without compromising sustainability.

“When growing gets tough — like in a drought — you can’t just turn off your water. You can’t kill your trees. You need to figure out what you can grow in your new conditions. When lemons became difficult to grow 40 years ago, people switched to avocados. So, maybe now it’s time to ditch avocados. I know I’m in the process of trading avocado trees for coffee trees on my property. As farmers, it’s our job to listen to the land… to find another alternative. And I think that alternative is coffee; coffee is the new wine in California.”

While Mraz hopes to encourage others to grow their own food by following his example, he has also become an advocate for getting the job done. Working with Kiss the Ground, a California-based nonprofit dedicated to improving soil health worldwide, Mraz is featured their The Soil Story, a five-minute film that reinforces the fact that healthy soil means a healthy planet and that it can curb drought and global warming. The film urges viewers to sign a petition and show support for enacting a California state fund of 160 million dollars to improve soil health.

He even took to Change.org to further advocate for signatures by writing a letter to Californians.

“I need your help, the Governor needs your help. Sign this petition to tell California elected officials to make sustainable soil programs a part of their climate change initiatives. I know, at first it sounds a little silly. Investing in soil? But California is the leading agricultural economy of the world. The way we treat our soil has a massive impact on our environment, our water supply, and farmers throughout the state.”

Thanks in part to Mraz and Kiss the Ground, the petition has received close to 25,000 signatures and helped pass the Healthy Soils Act, which diverts funds from the greenhouse gas reduction fund to farmers who are building soil carbon.

Mraz is also a loyal supporter of WhyHunger, a grassroots organization dedicated to fighting hunger and poverty in the United States that was founded by the late musician Harry Chapin in 1975.

Interesting stories about Jason Mraz and his food projects in online media: