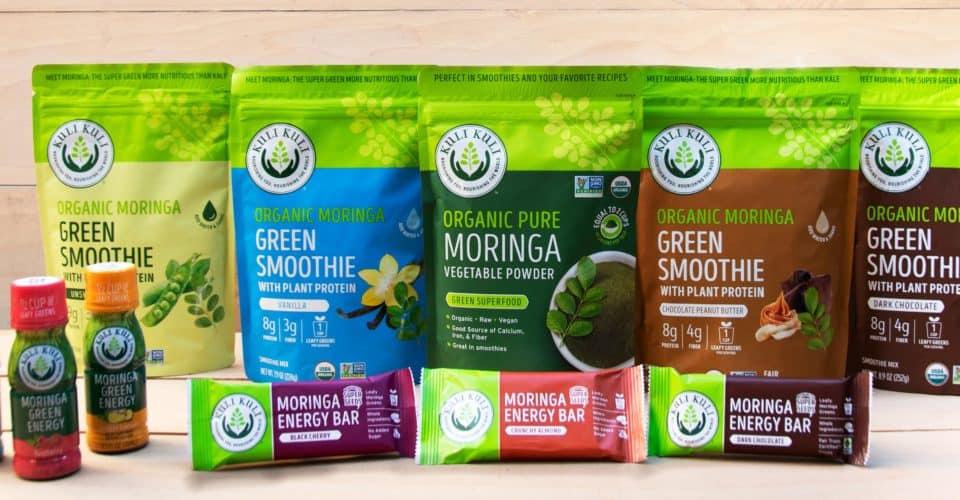 What the company does: Kuli Kuli sells delicious and sustainably-sourced products made with moringa leaves, one of the most nutrient-dense plants on the planet.

A Nutritional Powerhouse, Grown From the Cleanest Sources

The leaves of the moringa tree, typically found in the tropics, are distantly related to cruciferous vegetables like broccoli and cabbage. The plant packs a nutritional punch: it’s protein-rich, packed with essential amino acids, and contains 27 vitamins and 46 antioxidants. Compared to kale, another “superfood” vegetable, moringa has twice as much protein, four times more iron, three times more calcium, and 2.5 times more fiber. Kuli Kuli’s moringa products makes it easy to eat your daily recommended servings of vegetables.

Kuli Kuli obtains its moringa from the highest-quality and most sustainable sources, and third-party research has verified that the company’s “Pure Moringa Powder” product is the cleanest on the market.

Harvesting from moringa trees requires little water and it can also help restore nutrient-depleted soil. Therefore, the moringa tree is an ideal crop for farmers to cultivate, especially if they are seeking to supplement their income.

Kuli Kuli works with approximately 2,400 small-scale farmers and women’s cooperatives across the globe, providing them with fair wages, ongoing training, technical assistance, and a guarantee of purchase. Kuli Kuli’s partnerships enable their producers and suppliers to scale their businesses and improve the health of their communities.

Kuli Kuli’s commitment to sourcing sustainably has earned them several titles and accolades, including the 2018 Whole Foods Women-Led Entrepreneurship Supplier of the Year Award.

Moringa tree planting has both local and global environmental benefits. It can grow in sandy or depleted soil, making it an ideal candidate for reforestation projects. The trees have also been shown to prevent erosion, act as wind barriers, improve hydrological cycles, and provide much-needed shade that protects nearby crops from damage caused by intense heat or sunlight.

According to Kuli Kuli, moringa trees can also absorb up to 900 kilograms of carbon dioxide, a rate twenty times higher than general vegetation.

Lisa Curtis first conceptualized Kuli Kuli in 2010 when she was only 22 years old. At the time, she was working as a Peace Corps volunteer in Niger, West Africa. As a vegetarian, she struggled to find locally-available food to eat. Until then, her diet in Niger had consisted mainly of rice and millet, which left her feeling tired and deprived. When Lisa mentioned her unsatisfying diet to the female villagers at the local community center, they suggested she try eating moringa.

After trying it for herself, Lisa was inspired to start a company that would both spread the nutritional benefits of moringa across the globe and also support the women who produced it. She and Jordan Moncharmont officially co-founded Kuli Kuli in 2011, and their products first made it to market in 2014. Today, the company is a multi-million dollar social enterprise that sells its products in more than 7000 stores.

In 2017, Lisa was honored with the prestigious Forbes 30 Under 30 Award for her work in social entrepreneurship.

Latest “socially responsible” project: Kuli Kuli recently closed a round of Series B funding, raising a grand total of $5 million. Curtis announced that these additional funds will be used to further scale their moringa powder, moringa shot, and moringa bar products.

Any additional projects or products:

In 2015 Kuli Kuli partnered with Whole Foods, the Clinton Foundation’s Haiti Program, the Smallholder Farmers Alliance, and local Haitian farmers. Together, they succeeded in planting hundreds of trees in an effort to reforest the Haitian landscape. Kuli Kuli and the Smallholder Farmers Alliance also worked closely with local farmers to teach them farming techniques in the event of droughts caused by climate change.

Where to buy: https://www.kulikulifoods.com/products and in select stores across the U.S., including Whole Foods Markets, Sprouts and Kroger.

Copyright 2019-20 Diet Detective | Dr. Charles Platkin
Diet Detective, Inc., an non-profit organization.
Back to top
Subscribe To The Weekly Food & Nutrition News and Research Digest
Our weekly email news and research digest is everything you need to know about food, nutrition, fitness and health.
We respect your privacy. Your information is safe and will NEVER be shared.

Don't miss out. Subscribe today.
×
×
We respect your privacy. Your information is safe and will never be shared.