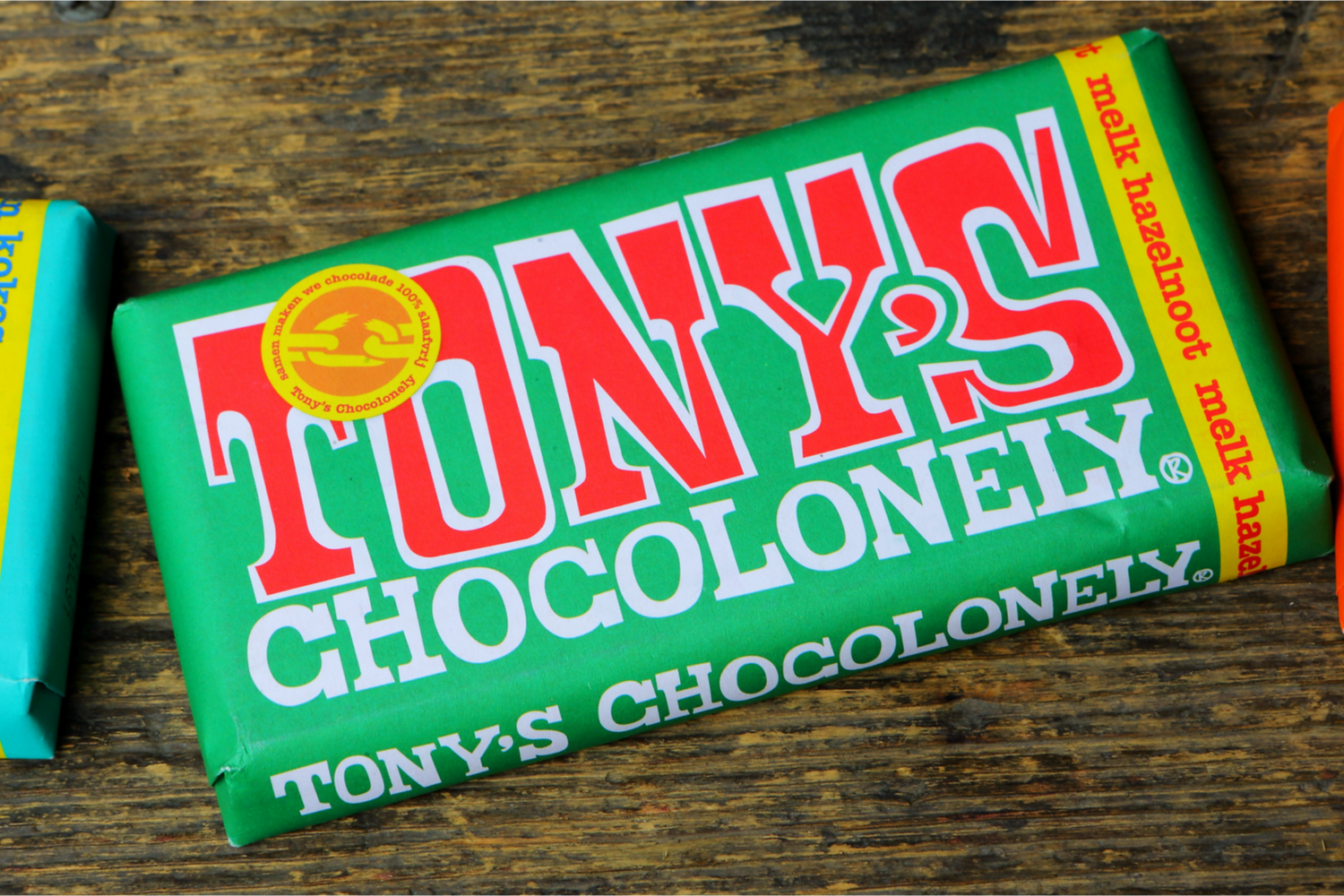 Tony’s Chocolonely is a Dutch company that produces a wide variety of chocolate bars while working to make chocolate production 100 percent slave-free. Last year, Tony’s sold more than 43 million chocolate bars and celebrates the fact that its growth increases its ability to work with more farmers who benefit from fair labor and a better quality of life for workers in the chocolate industry.

The company works with a three-pillar strategy: raising awareness, leading by example, and inspiring to act. Based on this approach, Tony’s gives its cocoa farmers as well as other businesses in the industry the opportunity to change the chocolate manufacturing as a whole.

Its mission includes paying cocoa farmers a higher price for their product and investing in their further agricultural knowledge and training in order to help improve productivity. Tony’s Open Chain initiative is a knowledge-sharing platform that aims to end illegal child labor and modern slavery within the industry.

The company’s Impact Report from 2018-2019 stated that the goal of the economic system driving the cocoa and chocolate industry is to maximize profits, by underpaying cocoa farmers in West Africa, leaving them in extreme poverty. As a result, and out of desperation, the farmers allow their children to do dangerous work or perform unpaid labor on plantations. In Ghana and the Ivory Coast, 2.1 million children work on the land under illegal conditions because their parents don’t earn enough from their cocoa harvest to support their families. In the Ivory Coast, the average cocoa farmer earns $0.78 cents per day.

Tony’s cocoa beans are fully traceable, meaning that they are purchased directly from partner cooperatives Kapatchiva, Ecojad, Socoopacdi and ECAM in Ivory Coast and ABOCFA in Ghana. Tony’s Beantracker ensures that all beans can be traced back to their point of origin. The cocoa used is easily traced back to its source and is Fair Trade certified and organic.

The price that farmers in Ghana and Ivory Coast receive for a kilo of cocoa is known as the Farmgate price and is determined by local authorities each year, but Tony’s is the first chocolate company that started calculating and paying an additional premium for its cocoa. Tony’s additional premium was set last year at 29 percent above the farmgate price in Ghana and 39 percent in Ivory Coast. Tony’s changes the premium each year, based on calculated living costs, before the start of every cocoa season.

Tony’s invests in its farmers in order to make them stronger by providing guidance on professionalism and productivity and allowing them to achieve economies of scale negotiate better prices by purchasing production resources collectively.

Tony’s commits to working with farmers for at least five years, giving the ability to make long-term investments in their farms. Resulting from the long-term partnership, Tony’s creates more supportive conditions within their communities, including the Child Labor Monitoring and Remediation System (CLMRS), which surveys the cooperatives in order to improve living conditions for farmers.

The premium, along with the training that Tony’s provides for its farmers encourages them to improve their crop quality and yield Tony’s believes that motivated farmers can nearly double their harvest yields.

Tony’s started thirteen years ago when a Dutch journalist, Teun van de Keuken, learned about child slavery on cacao farms in West Africa And began to investigate the problem on his television program Keuringsdienst van Waarde (meaning Inspection of Service of Value), exposing the fact that, despite the 2001 Harkin-Engel Protocol agreeing to ban the “worst forms of child labor,” child slavery was still common in West Africa, where 60 percent of the world’s cocoa comes from.

The Chocolonely Foundation was then created in 2008 with efforts to donate one percent of its net revenue to projects aimed towards creating a slave-free chocolate industry.

Tony’s has implemented a Child Labor Monitoring and Remediation System (CLMRS) with each of its partner cooperatives in Ghana and Ivory Coast. Though Nestle declined the production of a slave-free chocolate bar, along with the International Cocoa Initiative, Nestle developed CLMRS in order to address the issue of child labor in cocoa production, the system monitors the children of the farmers who supply cocoa to Tony’s.

In September 2018, Tony’s started creating initiatives to eliminate the need for children to do dangerous work and provide alternatives to the illegal work being forced upon them. In Ivory Coast, all children without a birth certificate are at higher risk for ending up in unsafe working conditions because they are harder to trace within the communities and therefore harder to be kept accounted for. From this past year, Tony’s advocated so that more than 3,000 children would receive a birth certificate. Health insurance, bicycles to get to school, and wheelbarrows to prevent children from heavy lifting have been provided, as well as vocational courses for teenagers for whom education is still mandatory but who are no longer attending school because they need to work.

Where to buy: Shop online or use the online store locator to find Tony’s products near you.

How Dining Out Leads to Unhealthy Eating for Most Americans

Chefs Who Cook Well and Do Good: Cat Cora