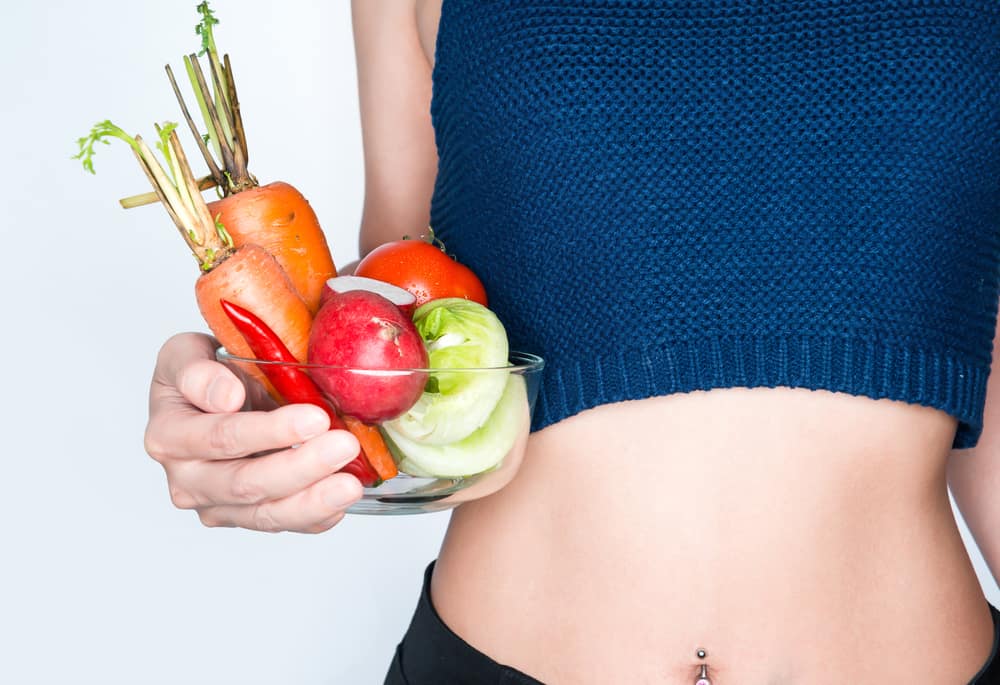 Can you really trim belly fat from your body? Not exactly. You cannot simply do more sit-ups and eat certain foods, and presto, your belly is flat. That said, however, you can increase the odds of being able to rid yourself of dangerous belly fat (associated with an increased risk of diabetes, heart disease, hypertension and some cancers) by following a few simple tips:

Fructose is the form of sugar found in fruit, fruit juice and in many other foods. In fact, a great deal of it sneaks into our diets through high-fructose corn syrup (HFCS) in sodas. Researcher Peter Havel from the University of California, Davis, recruited 33 overweight and obese adults for a diet study in which 25 percent of the participants’ energy came from either fructose or glucose (another form of sugar). At the conclusion of the study the fructose group showed an increase in belly fat. According to the researchers, this increase in abdominal fat did not occur in the group who consumed glucose instead, even though both groups gained an average 1.5 kilograms in weight. Additionally, those who consumed fructose also had increased levels of fatty triglycerides, which get deposited as intra-abdominal fat, and cholesterol. Their insulin sensitivity also fell by 20 percent. Glucose appeared to have no effect on these measures.

In a study reported in the American Journal of Clinical Nutrition researchers at Penn State University recruited 50 obese adults — 25 male and 25 female — between the ages of 20 and 65 who were at increased risk of developing cardiovascular disease and diabetes. They were randomly assigned to either a group instructed to get all of their grain servings from whole grains or a group told to get all their grain servings from refined grains. Results showed that waist circumference and body weight decreased significantly in both groups — 8 to 11 pounds on average — but weight loss in the abdominal region was significantly greater in the whole-grain group.

Another study done by researchers at the Keck School of Medicine, University of Southern California in Los Angeles and reported in the American Journal of Clinical Nutrition looked specifically at Latino youth and found that small decreases in fiber were associated with a 21 percent increase in abdominal obesity. The researchers also found that soluble fiber intake was inversely associated with waist circumference and metabolic syndrome. They determined that increasing fiber intake by 6 grams a day could have a significant impact on young people’s belly fat.

A third study done by researchers at Tufts University and reported in the Journal of Nutrition recruited 177 men and 257 women between the ages of 60 and 80 and found that those who had a relatively higher consumption of whole grains from cereals also had lower belly fat.

A study done at the University of Michigan and reported in the Journal of Medicinal Food found that adding tart cherries to your diet may reduce “abdominal fat, as well as inflammation and triglyceride levels.” Animal studies show that intake of the antioxidant anthocyanin (the pigment that gives color to fruits and vegetables), which is contained in tart cherries, is more than likely what caused the reduction in belly fat. While sweet cherries are also rich in anthocyanin, they have not specifically been studied in relation to reduction in belly fat.

Two recent studies, one done by researchers at the University of Athens and reported in the American Journal of Clinical Nutrition and the other by researchers at the Imperial College London and reported in the Journal of Nutrition, found that a Mediterranean diet (vegetables, legumes, fruits and nuts, whole-grain cereals, fish, mono- and polyunsaturated fat, and low consumption of meat and dairy products) is associated with lower abdominal obesity.

Researchers at University of Michigan found that a diet rich in blueberries may help reduce belly fat. The researchers studied the effect of freeze-dried blueberries crushed into a powder and used as 2 percent of calories consumed in either a low- or high-fat diet by a particular strain of rat that is prone to being severely overweight.

After 90 days the rats that received the blueberry-enriched powder had less abdominal fat, lower triglycerides, lower cholesterol and better fasting glucose and insulin sensitivity than the control group. The effect is thought to be due to the high level of phytochemicals — naturally occurring antioxidants in the blueberries.

A study conducted by the Children’s Nutrition Research Center in Houston and co-researchers from Tulane University in New Orleans, and reported in the Journal of the American College of Nutrition, looked at foods and beverages consumed by 1,306 young adults ages 19 to 38 to determine if there was an association between calcium and obesity. They found that eating higher amounts of calcium-rich foods was associated with more abdominal fat. Make sure to keep all dairy products no- or low-fat, and avoid added sugar. To give you an idea of how much difference milk can make, a person who drinks one glass of whole milk a day will save 70 calories by switching to skim. That’s 25,480 calories a year, the equivalent of 7.3 pounds.

Eat Lean Protein Research reported in the Journal of Nutrition found that lean protein intake is inversely associated with belly fat. Fish and chicken (without skin) are examples of lean protein. Egg whites are a favorite: They’re low in calories and a great source of lean protein. Four egg whites equal 68 calories. You can also try lean cuts of pork and turkey. (Click here for more information on protein and diet.)

Sodium is hidden in much of our food, including cereals, restaurant foods, fast food and frozen foods, just to name a few. Sodium retains water and can cause you to look and feel bloated.

A study conducted by Provident Clinical Research, Bloomington, Ind., that appeared in the Journal of Nutrition recruited 137 overweight or obese individuals and divided them into two groups. One group consumed green tea containing 625 milligrams of a type of antioxidant known as catechins, and the other group acted as a control. Both groups did 180 minutes per week of moderate-intensity physical activity. After 12 weeks, those who drank the green tea had less abdominal fat than the control group. There is good research to show that green tea has other added #health benefits as well, so it couldn’t hurt to drink several cups each day. Catechins rid the body of free radicals that can contribute to cancer.

Alcohol has more calories than most people realize, and there’s something else that many are not aware of — alcohol causes belly fat. The Journal of Clinical Endocrinology & Metabolism found that women who have more than one drink a day, men who have more than two drinks per day, and those who binge drink once per week or more have increased abdominal fat.

According to Swiss researchers at Medical Polyclinic at the University Hospital in Switzerland, experimental evidence from several metabolic studies showed a suppression of fat oxidation by alcohol and thus the enhancement of a positive fat balance in the belly. The theory is that calories from alcohol are not an available source of energy and thus get stored as fat.

Believe it or not, belly fat leads to more belly fat. A team led by Dr. Kaiping Yang at the Lawson Health Research Institute at The University of Western Ontario found that abdominal fat tissue produces a hormone called neuropeptide Y, which stimulates fat cell production and makes you hungrier.

Diet Detective Investigation: Are the Marketing Claims True? Are These Food Products Worth It?