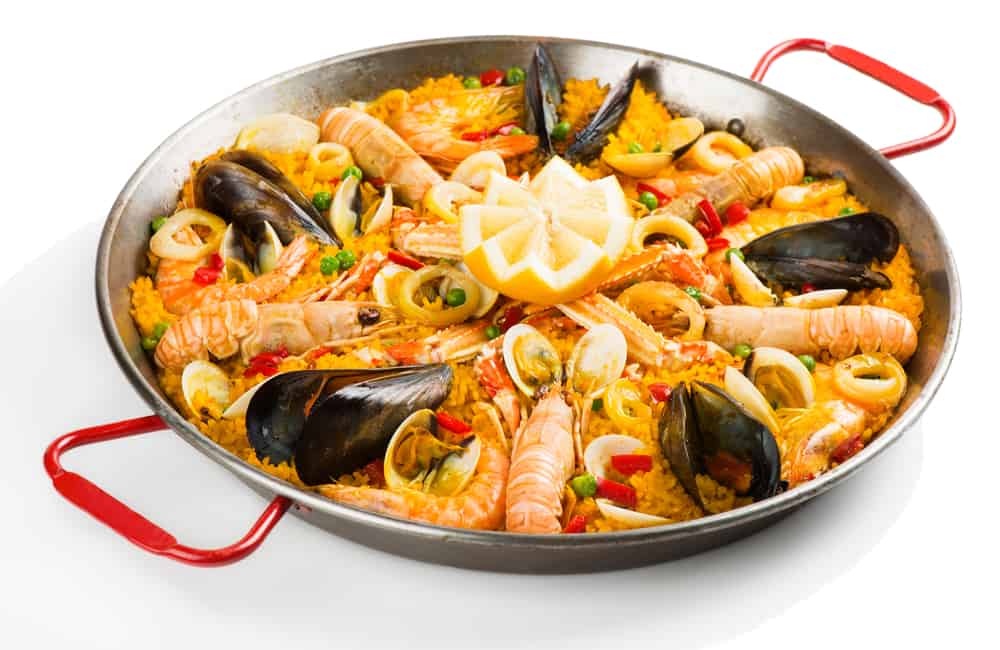 Yellow vs. White Rice
I’m not sure why, but some people are under the impression that yellow rice is healthy, or, at the very least, healthier than white rice, but it’s not. One cup of regular white rice has about 170 calories, while Goya Yellow Rice Spanish Style Arroz Amarillo has 640 calories per cup. Yellow rice is typically made with the addition of oil and/or butter, some vegetables and annatto powder or saffron. The best choice would be brown rice, which has 220 calories per cup but is packed with 3.5 grams of fiber and 5 grams of protein.

Black or Pinto Beans vs. Refried Beans vs. Fried Plantains
Black beans or pinto beans are a staple in many Latin American cultures, and in terms of #health, when prepared in a healthy way (which they’re typically not) they are very strong nutritionally. Beans, in general, are rich in protein, fiber, folate, manganese, magnesium, thiamin, phosphorus, iron and phytochemicals. The difference between black and pinto beans is minuscule: only about 10 calories. One cup of boiled black beans is about 228 calories with 16 grams of protein and 8 grams of fiber, while pinto beans have 236 calories, 14 grams of protein and 12 grams of dietary fiber. Additionally, a study in the Journal of the American College of Nutrition has reported that eating just a half-cup of pinto beans daily dropped total cholesterol and LDL cholesterol by more than 8 percent. Think about this: A half-cup of oatmeal eaten daily will reduce cholesterol 2 percent to 3 percent. Just make sure the beans are not prepared with lard (fat), as they often are in restaurants.

Refried beans are typically used as a dip, accompanied by chips and guacamole. They are also often served with burritos and tacos. The name is actually misleading because the beans are fried only once, but with more than 240-280 calories per cup they are not a very good choice.

Plantains are a staple food in Latin America because of their versatility and availability. They’re actually similar to bananas (except that you don’t eat plantains raw), and one medium plantain (about 6.5 ounces) has about 218 calories, very little fat and almost 3.5 grams of fiber – nice. Plantains are rich in potassium and vitamins C and B6. Research has also shown an anti-ulcerogenic effect against aspirin-induced ulcers with unripe plantains (you can still cook them; they just need to be green).

The problem begins when you start frying the plantains. Just as with any other food, frying turns good into bad. A 1-ounce strip of fried plantain can have as many as 70 calories. Green or “unripe” plantains contain a lot of starch and very little sweetness, so they are most often used as a vegetable (like a potato) rather than a fruit. In some cultures when plantains are prepared like mashed potatoes, fried eggs, salami and even bacon are mixed in. When the plantain is very ripe it becomes sweet and can easily be baked instead of fried for a tasty side dish.

Paella vs. Ceviche
Paella is a one-dish meal composed of rice, seafood (mussels, clams, shrimp, etc.), chicken and chorizo and cooked with saffron and oil. Paella originated in Spain and is typically served to large groups because it is so easy to make, but it’s also very high in calories – 600 to 1,000 for an 8- to 10-ounce serving.

Ceviche is a much better choice, but it’s most often served as an appetizer rather than an entrée. It’s composed of a variety of raw fish and/or shellfish “cooked” by marinating it in fresh citrus juice and often flavored with cilantro. A low-calorie treat, it has about 100 to 150 calories for an 8-ounce serving. Keep in mind, you really need to be careful about how you prepare ceviche or where you order it because if it isn’t done right you can get really sick.

Enchiladas basically are small tortillas stuffed with seafood, chicken, vegetables or beef and then rolled up and baked. Then the entire enchilada is typically topped with tomato sauce and cheese — which can make it even less healthy than the empanada. Enchiladas are also in the 250- to 350-calorie range, but are smaller in size. (On the Border Beef Enchilada with Chile con Carne, 210 calories for one serving.) If you can get your enchiladas made with corn rather than flour tortillas, you can save some calories.

Dulce de Leche vs. Flan
Dulce de leche is a dessert very similar to caramel that’s prepared by heating sweetened condensed milk until it thickens to a kind of pudding texture. Just 1 tablespoon has 90 calories — wow! Flan is a custard dessert made with milk, cream, sugar, eggs and syrup that’s basically the same as crème caramel, and it is also very high in calories — about 230 calories for half a cup. If you plan on eating just a tablespoon of the dulce de leche, obviously that’s your better choice, but I would suggest cutting up a mango, which has only 107 calories per cup and is also packed with 3 grams of fiber, potassium and loads of other great nutrients.

Cafe Con Leche vs. Cuban Coffee (Cafecito)
Cafe con leche, known as café au lait in France or café misto in Italy, is basically coffee made with a lot of very hot, frothy milk. A 16-ounce cup has about 130 calories. Cuban coffee (when served in a group it’s called a colada) is considered a very social drink and is usually served “shot” style. It’s actually an espresso shot that’s sweetened with sugar as it is being brewed. Cuban coffee can have as many as 30 calories per shot, and it tends to be very sweet and very strong; however, it’s clearly the lower-calorie choice if you have just one or two. ____________________________________