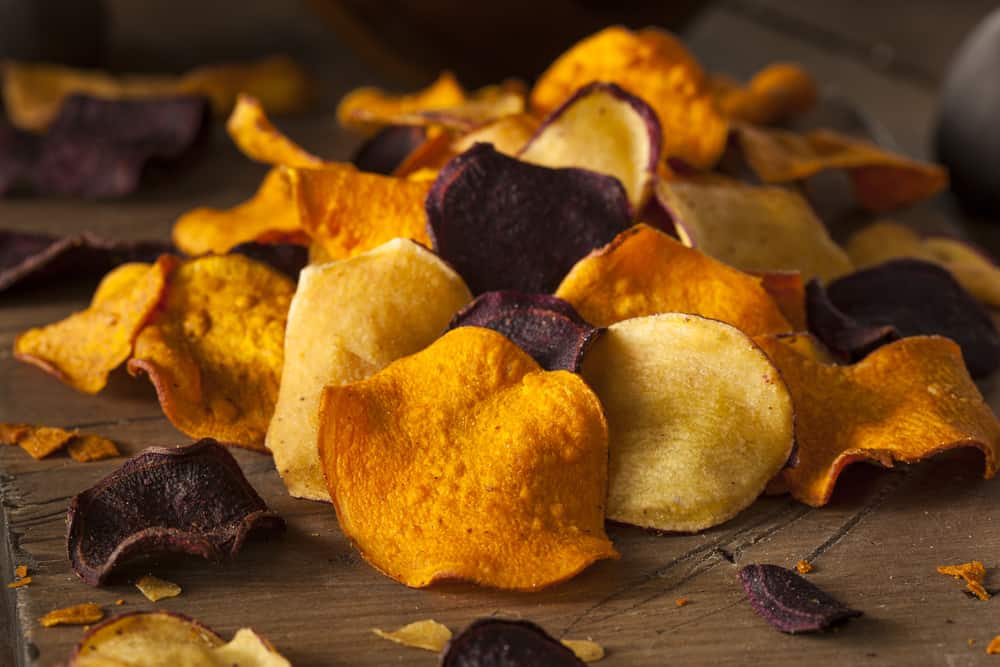 Claims: To Kellogg’s credit, they’re not necessarily saying that the product is a “healthy” choice. However, it is easy for parents (and children) to misinterpret the healthfulness of this product. The box says it’s made with “real fruit and yogurt,” has 100 percent of the daily requirement for vitamin C and is a good source of calcium.

Facts: This product does, indeed, contain fruit and yogurt, 100 percent of the RDA for vitamin C and 100 milligrams of calcium. And each serving has 80 calories, 1 gram saturated fat, 0 milligrams cholesterol and 10 milligrams sodium, meaning that it’s a low-fat, low-saturated-fat, low-sodium #food.

Concerns: “The fruit and yogurt are just in trace amounts: Yogurt is almost the last ingredient on the label, and the first ingredient — fruit concentrate — is closely followed by a couple of types of added sugar,” says Dawn Jackson Blatner, R.D., a spokesperson for the American Dietetic Association.

David Ludwig, author of Ending the Food Fight (Houghton Mifflin, 2007) and director of the Optimal Weight for Life (OWL) clinic at Children’s Hospital, Boston, calls this “fake food,” saying that it is a “highly processed product, chock-full of factory-produced ingredients, bearing little resemblance to anything from nature. The first four ingredients are variants of sugar (pear purée concentrate is just the sugar extract of pears; then maltodexin, a sugar-like compound; then actual sugar; then apple juice concentrate, another sugar extract). The minor amount of actual yogurt present is heat-treated after culturing, so the potentially beneficial probiotics (yogurt bacteria) are destroyed. Then, to top it all off, they add a host of artificial flavors and colors. Thus, the healthful associations with fruit and yogurt in the title are totally misleading.” His advice: Just say no.

Blatner agrees: “Don’t let them ROLL one over on you — this isn’t a healthy food, even with the #health claims, because it has plenty of added sugar and palm oil — a saturated fat — and no fiber to speak of.”

Bottom line: This is definitely not a great choice. Eating low-fat yogurt with “real” fruit is clearly the better option. However, according to Blatner, because of the added vitamin C and calcium, it could be the lesser of the evils when compared with other similar snacks. “But don’t forget about how great whole, real cherries stirred into nonfat yogurt would be instead,” she adds.

Stonyfield YoKids: Is it really “Full of good nutrition?” (www.stonyfield.com)

Claims: This is a healthful, organic, low-fat snack.

Facts: “Given that yogurt is a bona fide healthy food (no one’s arguing with that) and that YoKids products are pretty much unadulterated yogurt — yes, this product is a healthy snack choice. This fact is verifiable by the numerous naturally occurring vitamins and minerals (not to mention some protein) that it provides,” says Shelley McGuire, Ph.D., a professor of nutrition at Washington State University, Pullman. These squeezes are only 60 calories per tube, which is very low for a kid’s snack, and they even have 1 gram of fiber. Not bad.

Concerns: Not too many, other than whether being organic makes it a “healthier” snack. According to McGuire, “The answer to this turns out to be more philosophical than scientific. Indeed, although many would like to think otherwise, being ‘organic’ has absolutely nothing to do with a food’s nutrient content. There is no evidence that the nutrients found in organic food are different from those found in nonorganic foods.”

Bottom line: “Compared to Kellogg’s Yogos Rollers, Stonyfield YoKids is what we call a ‘real food.’ The first ingredient is organic low-fat milk; added sugar is listed once and comprises well under half the total calories; live probiotic (yogurt) cultures are present; and all the ingredients are natural. Since it’s actually very low in total fat, top it off with a few nuts (pecans, walnuts, almonds) for a balanced, nutritious snack,” says Ludwig. This is a very good choice for a child’s (or adult’s) snack.

Claims: “Real” is part of the current advertising campaign for Hellmann’s Real Mayonnaise — “It’s Time for Real.” The concept is that Hellmann’s mayonnaise is made with “simple ingredients” such as eggs, oil and vinegar, and that it represents “real food,” not the over-processed foods being marketed to people today. “I actually like this campaign, as I often encourage clients and consumers to eat as many whole and real foods as possible (as opposed to consuming too many foods that have too many ingredients, or, at the very least, foreign or hard-to-pronounce ingredients on their ingredients list),” says Elisa Zied, M.S., R.D., a New York City dietitian and author of Feed Your Family Right! (Wiley, 2007).

Facts: The recipe for real, traditional mayonnaise calls for eggs, vegetable oil, vinegar and seasonings. Hellmann’s, also known as Best Foods, uses these traditional ingredients in its products, as do other brands of mayonnaise. Foods such as mayonnaise and vegetable oils are excellent sources of heart-healthy unsaturated fats as well as vitamin E and essential fatty acids. A good #diet should have 20 percent to 35 percent of calories coming from fat, predominantly unsaturated fat, so mayonnaise is a healthful spread, says Joan Salge Blake, M.S., R.D., a nutrition professor at Boston University.

Concerns: Similar to oils, a tablespoon of mayonnaise provides 90–105 calories — this is very calorie-dense stuff. Of course, all foods can be healthful in the right portions. However, Americans don’t do well with portions: They underestimate and overindulge. “Even though it has REAL ingredients, if people over-portion, their waistlines can be in REAL danger. Light mayo has half the calories (45 per tablespoon), and its first ingredient is real water (which is the primary reason it has fewer calories). So if someone has a heavy mayo hand, it is best to go with a light version,” says Blatner.

Bottom line: Mayonnaise is very high in calories per serving, so if you’re one of those people who has trouble with portion size — watch out. Real or not, it could end up costing you pounds. If you don’t mind the taste, try the light versions; they’re typically half the calories. Real mayonnaise is really fatty — but much of its fat comes from soybean oil, which is a healthful fat. If you can use a measuring spoon and stick to a tablespoon or less, it is a good choice, says Blatner. If you’re watching your waist, try mixing real mayo with nonfat yogurt for a spread with fewer calories. You can also add some chives to your mayo mix for a blend with zip, adds Blake.

Claims: You get half a serving of real fruit in every ounce, and this is a nutritious snack. “This is stretching,” according to Lona Sandon, M.Ed., R.D., a professor of nutrition at the University of Texas Southwestern Medical Center at Dallas. “What is it being compared to? What criteria are being used?” Also, Frito-Lay appears to be implying that this is an all-natural product. Just go to their Web site and you’ll see their products shown in a farm setting. Plus, they do not offer nutrition information on the site; you actually have to go to www.fritolay.com to get the info.

Concerns: It’s easy to believe you’re purchasing a “better-for-you” food and be lulled into a false sense that eating Flat Earth Crisps is healthy.

Bottom line: Chips of any kind are not replacements for real fruits and vegetables — this is really just another type of snack food, no better than any other.