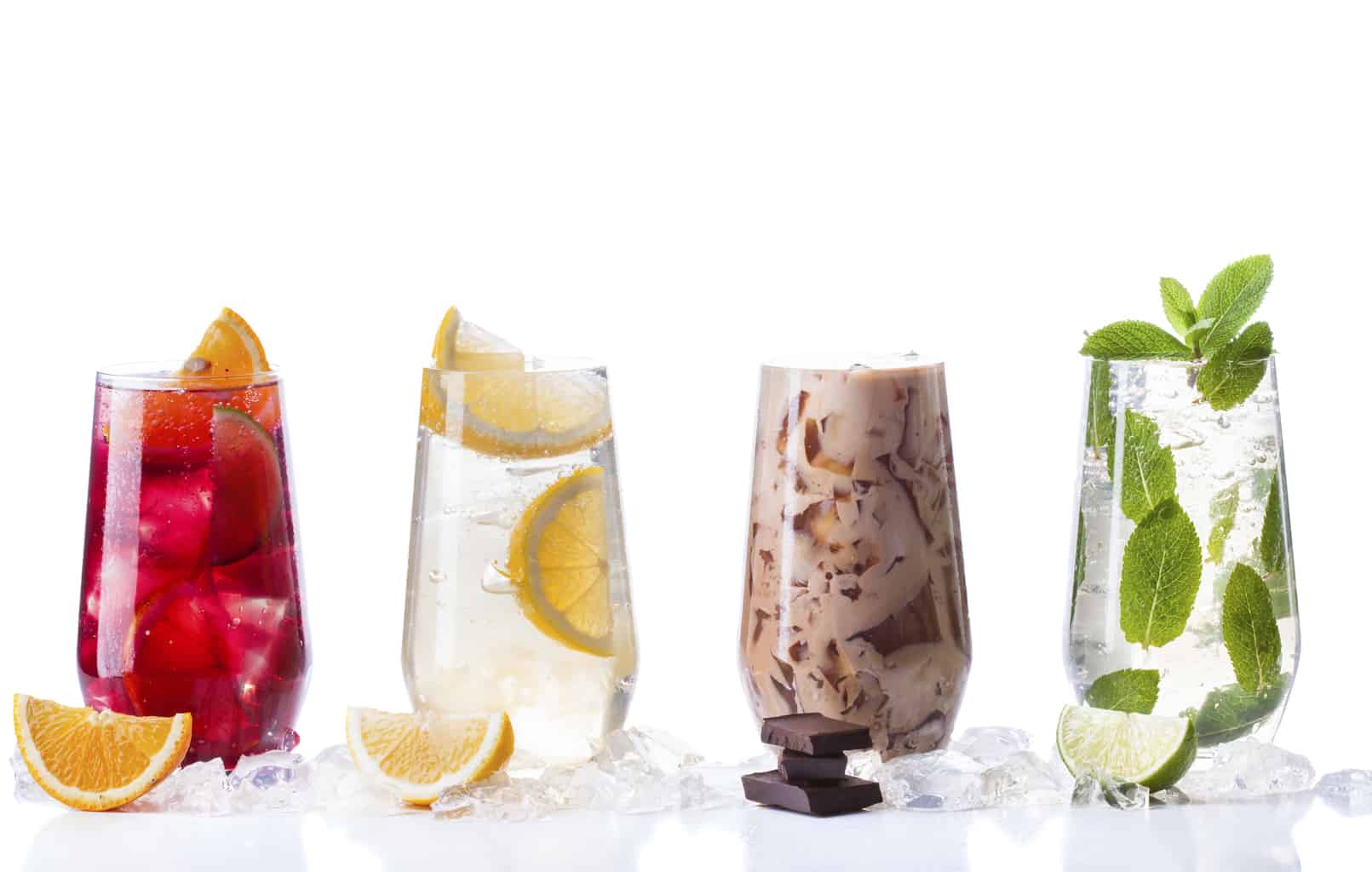 Dunkin’ Donuts (www.dunkindonuts.com) Coolatta with skim milk is 170 #calories, and the Iced Mocha Swirl Latte with skim is 180 calories — so they’re pretty close. Not great choices, but not the worst if you compare them with Dunkin’ Donuts Strawberry Banana Smoothie. The smoothie, with its claim of being made with “real fruit,” has 360 calories and 69 grams of sugar for just 16 ounces.

Among the best Calorie Bargains are the flavored coffees at Dunkin’ Donuts, which have about 20 or so calories per 10 ounces (without sugar or milk). They actually double the amount of coffee beans when they brew their iced coffee to compensate for the ice. Some of the flavors include caramel, chocolate, hazelnut, raspberry and blueberry — there are nine flavors in all.

McDonald’s Vanilla Triple Thick Shake vs. Starbucks Tazo Green Tea Frappuccino Blended Crème vs. Orange Crème Frappuccino Blended Crème
If you picked the McDonald’s thick shake as the highest in calories, you’d be wrong. The Tazo Green Tea Frappuccino is made with Japanese green tea that’s sweetened, blended with milk and ice and topped with whipped cream. All that adds up to 550 calories for 16 ounces — the same as the McDonald’s thick shake. And while the Tazo has green tea, the shake also has some benefits (not that I’m pushing the shake), including high levels of calcium and 13 grams of protein.

The Orange Crème Frappuccino Blended Crème is 430 calories when served up with whipped cream (save 110 calories by skipping the cream). Starbucks does offer a lower-calorie, light version of the Orange Mocha Frappuccino, which has 150 calories (without whipped cream). Not a perfect choice, but certainly better than the full-calorie versions or the shake.

As a side note — kudos to McDonald’s for not listing the shake as a beverage on its menu: It shares the category with desserts, the right place for a shake or any of these beverages.

Starbucks Tazo Green Shaken Iced Tea & Lemonade vs. Snapple Green Tea
Yes, these green teas have the famed antioxidant Epigallocatechin gallate (EGCG). That’s great, but you can have green tea without all the added “stuff” that makes it calorie-dense. Both the Starbucks and Snapple green teas have about 120 calories for 16 ounces.

Tropicana Fruit Squeeze vs. Glaceau Fruitwater vs. Glaceau VitaminWater vs. Fruit2O vs. Gatorade.
Glaceau Fruit Water is served up in a 20-ounce bottle and has 45-50 calories. It’s basically water and sugar — not better than plain water, but still better than a soda. The ingredients list calls the added sugar “crystalline fructose” — however, just because it says fructose doesn’t mean the sugar is from fruit. In fact, it’s from cornstarch, just like high-fructose corn syrup.

The VitaminWater (www.glaceau.com) is much higher in calories at 125 for 20 ounces and also has the same added sugar — crystalline fructose — some food coloring and added vitamins. I have to tell you, I’m confused about these waters. They make claims like “natural” and “low-calorie” and have names such as Defense, Endurance, Charge and Balance. In reality, while this may be a cool marketing tactic, these are far from #health #drinks. Keep in mind, a 12-ounce can of soda, which is hard to chug because of the carbonation, has 140 calories, which is only 15 calories more than the bottle of VitaminWater (although the water is 20 ounces, the soda is 12, but since most of us drink the entire can or bottle — the comparison works). Do we even need those extra vitamins? Check out the vitamins you do need and lack here: https://www.dietdetective.com/content/view/1318/159/ and https://www.dietdetective.com/content/view/1320/159/

Also on the market is Tropicana Fruit Squeeze, which has 50 calories per 20 ounces, with 9 grams of sugar vs. almost 40 grams for VitaminWater. The Tropicana Fruit Squeeze could be a nice alternative to soda; only thing is that it does have sucralose (Splenda), so if you’re uncomfortable with artificial sweeteners, you’ll have to find another option. Also made with sucralose, Fruit2O, which boasts that it contains no calories, fat or sugar, is a very sweet option if you’re hankering for a diet soda replacement.

Lastly, what about Gatorade? Granted, it is designed to replenish electrolytes after exercise and is not really a run-of-the-mill thirst quencher, but a 20-ounce bottle has about 160 calories. Whatever happened to good old-fashioned iced tea with mint, or homemade lemonade (without the added sugar, of course)?

Metromint vs. Hint vs. Tasmanian Rain
Now this is a category you can sink your teeth into — or your lips: tasty water without all kinds of additives. Metromint (www.metromint.com), which is one of our favorites, is made with real mint, and it’s delicious. There’s also Hint (www.drinkhint.com), which offers purified water with natural flavors — and no calories or artificial sweeteners. The flavors include lime, raspberry-lime and mango-grapefruit to name just a few. Finally, Tasmanian Rain (www.tasmanianrain.com) offers water that’s collected without ever touching the ground “from the purest skies on Earth,” according to the company, which is based in Australia and New York. The water is sold in fancy bottles resembling fine wine. The only negative is the price: almost $5 per bottle.

Another way to liven up your bottled water is by using Crystal Light On The Go (lemonade, peach tea, raspberry ice and iced tea). They’re small, easy-to-use packages that you can carry in your purse or pocket and drop into your 16.9-ounce cold bottle of water. Each package has 10 calories (it’s sweetened with aspartame). Propel also makes a similar packet (20 calories, sweetened with sucralose) designed to pour into bottled water.

Enviga vs. Propel Fitness Water vs. Red Bull
Enviga (www.enviga.com) claims to actually burn calories. Please show me studies other than the one that Enviga did itself that prove this. Yes, it has green tea, but even green tea has yet to prove itself as a calorie-burning tool. The good news is that Enviga has only 5 calories per can (sweetened with aspartame and acesulfame potassium — again, purists beware).

What about Gatorade’s Propel Fitness Water (www.propelwater.com)? It has about 30 calories per 24-ounce bottle and is an “excellent source” (25 percent of the daily value) of B vitamins (niacin, B6, pantothenic acid), which aid in energy metabolism. Maybe so, but shouldn’t we be getting these B vitamins from food sources such as bananas or turkey? As far as Red Bull is concerned, it is basically a souped-up can of sugar, water, caffeine and other assorted “goodies” (such as taurine) that have very little research supporting their health claims. Each can has about 110 calories. If you really want the Red Bull (www.redbull.com) effect without the calories, you can try the sugar-free (sweetened with acesulfame k, aspartame) version at only 10 calories.

Worth Mentioning
There is a new product called Dreamerz (www.dreamerzfoods.com) that is designed to help you fall asleep. Dreamerz uses natural ingredients such as reduced-fat milk, natural flavors and natural sweeteners, and it contains melatonin, a hormone that helps regulate sleep cycles. It’s about 100 calories per serving. Another new product on the market is JavaPop (www.javapop.com), which is basically an organic, Fair Trade Certified coffee soda — with real coffee — that’s available in espresso, vanilla, mocha, hazelnut and caramel flavors at about 115 calories per bottle.