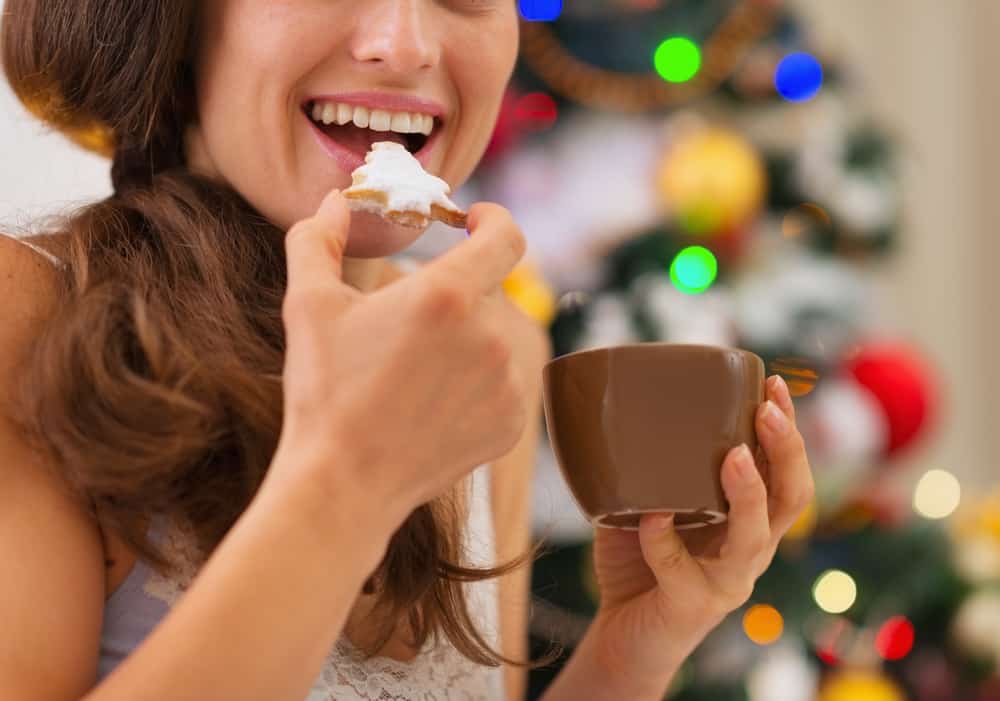 OK, I almost regret doing this; however, in the spirit of the #holidays — and good fun — I wanted to give you a sense of what you’re going to be eating over the next few weeks. The idea is to get some perspective on what a calorie means in terms of what it will take to burn it off so that maybe — just maybe — you’ll be able to have fun and eat responsibly.

ONE GENOA SALAMI SLICE ON A CRACKER WITH CHEESE = WRAPPING PRESENTS FOR 55 MINUTES
Those tiny little slices may seem harmless, but take a closer look. See those little white flecks, the ones that take up a good 25 to 50 percent of the slice? Those are little bits of calorie-laden lard. So, if you plan to go to town on the salami appetizers, I hope you’ve also gone to town on your present buying.

FIT TIP: If you have a salami weakness, at least make sure to skip its best friends — the crackers and Cheddar cheese. One cracker adds 16 calories, and just a half-ounce of Cheddar tacks on another 55. So if you really want the salami, enjoy it by itself.

TWO CHRISTMAS COOKIES = SHOVELING SNOW FOR 27 MINUTES
Holiday cookies vary in size and shape, but what with the butter or shortening, sugar, frosting and sprinkles, expect the calories for a typical sugar cookie to be in the range of 50 to 120. And a gingerbread cookie, also made with butter or shortening with the addition of molasses, can be even worse at up to 190 calories. That may not sound so bad, but be honest with yourself — can you really stop at just one? We’re talking almost a half hour of nonstop, hard-core snow shoveling for just two cookies. So check out the snowdrifts in your driveway before you grab that second cookie.

FIT TIP: Don’t keep cookies in a dish or bowl where you can see them, especially while you’re talking on the phone or sitting in front of the television. Instead, store them in an airtight container on a very high shelf.

ONE SLICE OF FRUITCAKE = BUILDING A SNOWMAN FOR 80 MINUTES
At 325 calories for a 3.5-ounce slice, traditional fruitcake, made with walnuts, cherries, raisins, pineapple and molasses and spiced with cinnamon and cloves, will add up to a long stretch of snowman building — 80 minutes to be exact. At that rate, you may have to borrow snow from your neighbor to use up the last few calories.

FIT TIP: According to the Wall Street Journal, fruitcake bakers believe the serving size should be only 1.5 ounces, or about 160 calories. And maybe they have a point. The redeeming quality of fruitcake is that it’s incredibly dense — so dense, in fact, that you probably don’t need a 3.5-ounce serving to feel satisfied.

FOUR BITE-SIZE MINI PIZZAS (3.1 OUNCES) = WAITING TO SEE SANTA WITH THREE RAMBUNCTIOUS KIDS (MILD CALISTHENICS) FOR 40 MINUTES
Those little pizzas with lots of cheese (and sometimes pepperoni) disappear so fast it seems they were never there, but your waistline knows the truth. And even chasing your kids around the mall won’t burn enough calories to keep you trim.

FIT TIP: Make ’em yourself. Toast pita bread with a sprinkle of Parmesan or part-skim mozzarella and some low-calorie tomato sauce. Then throw on veggies and enjoy a low-cal, easy-to-make snack.

ONE LARGE SCOOP OF BREAD STUFFING WITH SAUSAGE = PERFORMING THE NUTCRACKER FOR 65 MINUTES
A scoop of stuffing made with eggs, butter and sausage can be in the range of 350 to 500 calories, which means you’ll be doing pirouettes, spins, jumps and pliés for 65 minutes nonstop. Don’t kid yourself — stepping in for the sugar plum fairy doesn’t mean bopping to Rockin’ Around the Christmas Tree — ballet is a high-end aerobic workout.

FIT TIP: Prepare the stuffing with croutons, chopped apple, celery and onion, and moisten it with chicken broth. By the way, you don’t have to use any butter at all unless you’re cooking the stuffing in a pan outside the bird, in which case you have a choice of basting it with the turkey drippings or dotting it with butter.

ONE CUP OF EGGNOG (8 OUNCES) = DECORATING THE TREE FOR 97 MINUTES
Eggnog is a diet catastrophe. It packs about 340 to 460 calories, depending on the ingredients and proportions. Typically it includes raw egg, heavy cream and a shot or two of brandy. #Exercise-wise, you’re looking at 97 minutes of continuous tree decorating — up and down the ladder, finding the ornaments and reaching up to the top.

FIT TIP: Make your eggnog with skim milk — at least you’ll deduct the heavy cream from this diet disaster equation.

ONE CANDY CANE (1/2 OUNCE) = WRITING HOLIDAY GREETING CARDS FOR 23 MINUTES
Have you fallen a bit behind on your winter correspondence? Well, now is the time to get back in the game of shooting those family portraits and signing your name on the back — and if you’re trimming the tree with candy canes, you’d better have a lot of friends and family to send cards to this season. 23 minutes of addressing and signing greeting cards burns the 50 calories in a single cane.

FIT TIP: Lick, don’t bite (it will last longer) — and don’t start popping those red and green M&Ms while you’re practicing your penmanship.

THREE MINI SPRING ROLLS WITH DIPPING SAUCE = DANCING AS A ROCKETTE AT RADIO CITY MUSIC HALL FOR 19 MINUTES
At only 45 calories per 1-ounce roll, these might not seem like a bad deal — after all, a Rockette burns those calories in just six minutes on stage, even when the music is canned. But before you dig into the appetizer plate, give this a try: Kick your leg up to your nose. If you’re still standing up, do it again. In fact, do it for six minutes without taking a single break. How’d that work out for you?

The problem with those mini rolls is that they’re relatively insubstantial, and they’re often fried. So while one may not seem like a lot of calories, it becomes a lot when you’re on your seventh.

FIT TIP: First off, steam or bake them — don’t fry. And at your holiday party, work hard to escape the “have-to-eat-it-NOW” mentality. You know what I mean: You see the buffet table and make a beeline for it, piling three of anything that looks good onto a napkin to make sure you get enough of the good stuff. We all do it. But it means we end up with a lot of greasy, calorie-packed food in our hands — and in our stomachs.

FOUR PITTED OLIVES IN EXTRA-VIRGIN OLIVE OIL (1 OUNCE) = PREPARING FOR AND SERVING AT THE HOLIDAY PARTY FOR 51 MINUTES
They’re little, and they seem pretty healthy, right? Unfortunately, even soaking olives in their own heart-healthy oil leaves them dripping with excess calories — 150 for 1 ounce or four olives, to be precise. That’s the equivalent of 51 minutes of cooking, prepping, timing, slicing, arranging and serving at your annual holiday gala.

FIT TIP: There are some good olive choices. Cracked green olives have only eight calories apiece, so if you like the oil-soaked variety, at least mix them up. That way you can eat a few more without overdoing the calories. And while getting things ready in the kitchen, snack on baby carrots — if you opt for olives, you’ll OD on calories before the party even gets started.