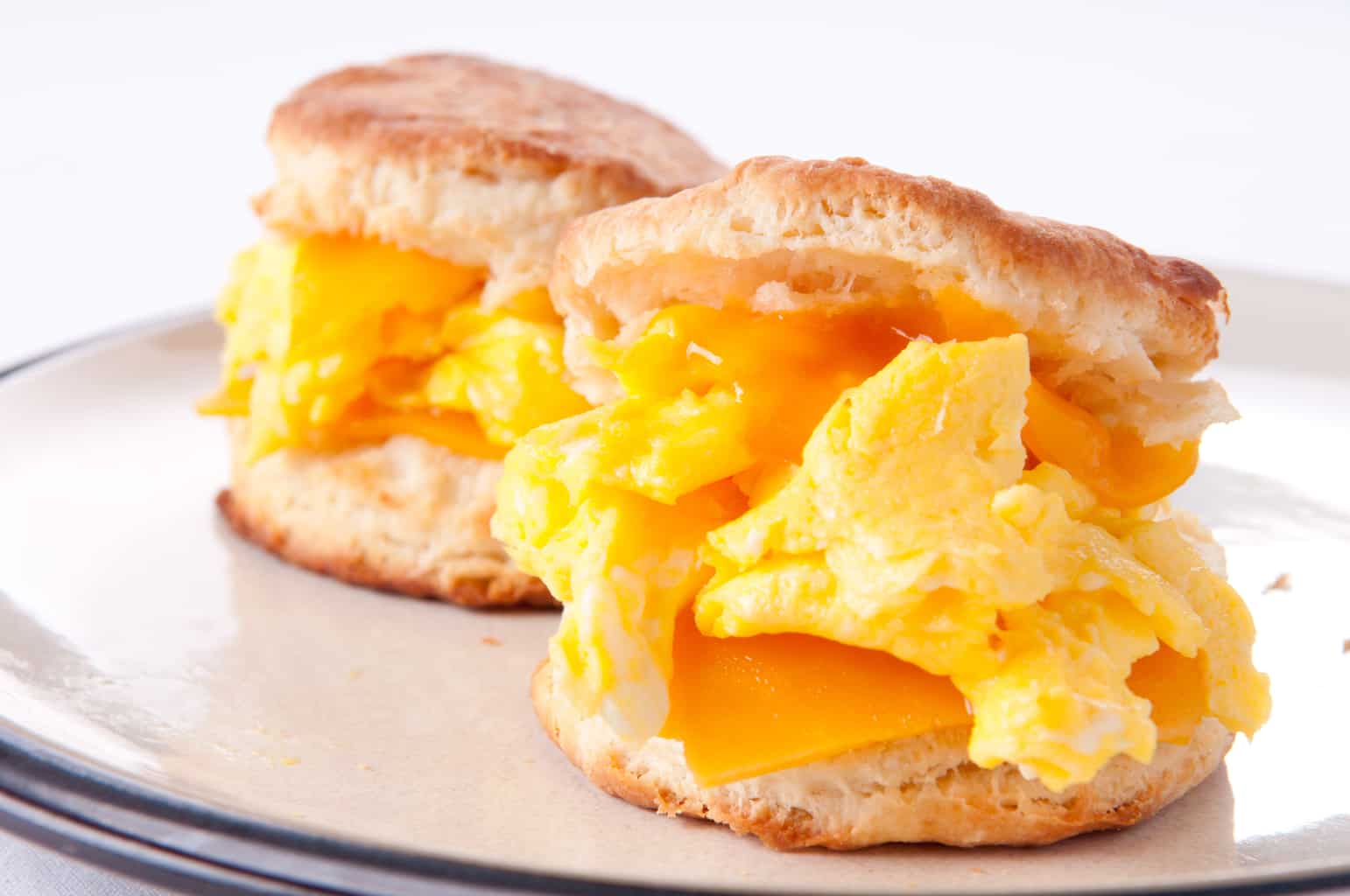 That all sounds splendid, but in the meantime, your cell phone is ringing and you’re trying to get the kids to school, all while making a mad dash to work. Even when experts are faced with the question, “Is it better to eat nothing at all for breakfast or something not so healthy,” the response is typically, “Eat something.” And often times, #fast food is the only option, but are there any healthy choices? Here are some ideas for foods you can choose without feeling guilty.

(As a point of reference, a person who needs 2,000 calories per day to maintain weight should aim for a breakfast of approximately 500 calories with less than 16 grams of fat, while keeping total daily fat intake below 66 grams.)

MCDONALD’S
The breakfast classic Egg McMuffin is actually a pretty good deal at only 290 calories. If you must add butter, use only half a pat and spread it on the egg (not the English muffin). You’ll use less butter without losing the flavor. Or you can put ketchup on your egg instead. Another good choice is the Fruit & Walnut Salad at 310 calories and 13 grams of fat. (Yes, walnuts add 140 calories, but they also keep you from getting hungry later.) Some McDonald’s locations serve their Fruit ‘n Yogurt Parfait dessert all day (160 calories, 2 grams fat).

FIT TIP: Stay away from the hotcakes and sausage at 770 calories and the cinnamon roll at 420. The huge Deluxe Breakfast packs 1,220 calories — which is like eating more than two meals at one sitting! And avoid hash browns at 140 wasted calories for less than 2 ounces. Spend those calories on something more substantial.

WENDY’S
Your choices are slim at Wendy’s, which doesn’t offer a full breakfast menu. Your best bet is the Mandarin Orange Cup or the Fresh Fruit Cup for 80 calories each. Or try the Fresh Fruit Bowl, which features fresh cantaloupe, honeydew melon and pineapple chunks along with red seedless grapes and yogurt for 220 calories. If you order the low-fat strawberry yogurt as a side it’s a larger portion and has 200 calories. Or, have lunch for breakfast and get the Chicken BLT Salad (330 calories without the dressing) or the Ultimate Chicken Grill Sandwich (360 calories).

FIT TIP: If you do order the yogurt, watch out for toppings like granola — one serving (less than an ounce) packs 110 calories.

DUNKIN’ DONUTS
Yes, it’s even better to grab a doughnut than to skip breakfast altogether. Go for the Black Raspberry or Bavarian Kreme doughnuts, which only have 210 calories each. Or try a chocolate frosted doughnut at just 200 calories. A plain glazed has only 180. All doughnuts are not created equal — keep in mind that cake doughnuts have twice as much fat as yeast varieties and up to 170 more calories.

Dunkin’ Donuts also offers an Egg and Cheese English Muffin, which has less sugar than a doughnut and, with 280 calories and 15 grams of protein, is your most filling choice (especially with research showing that protein can be more filling than other nutrients).

FIT TIP: Avoid fancy coffee drinks that pack on calories, but an iced coffee (regular or flavored) with skim milk is fine (about 35 calories without sugar, 80 with sugar). Skip the muffins; they have anywhere from 300 to 600 calories and probably will not keep you full. Also watch out for some of the bagels — including the reduced-carb bagel with cheese at 380 calories, the multigrain bagel at 380 and the sourdough at 370 — mainly because once you add butter or cream cheese, you’re at almost 600 calories. Try the lower-calorie onion bagel at 320. Use lite cream cheese and save 80 calories per serving over regular cream cheese.

STARBUCKS
The Fruit and Cheese Plate isn’t a bad choice at 430 calories — it’s a little high, but you get a good mix of healthy fruits and protein. Otherwise, if you stick to skim milk and Splenda in your coffee, you can get away with coffee and a low-fat muffin for less than 400 calories — a good deal if it holds you over until lunch.

FIT TIP: It’s easy to go wrong with the baked goods. The Classic Coffee Cake has almost 600 calories, and the Crumb Cake has almost 700. Bagels start at more than 400 calories before you even add butter or cream cheese. Croissants have around 330 calories, the Banana Pound Cake has 360 calories and the Carrot Cake Bar packs 420 calories. And make sure you watch out for the drinks: a Mocha Frappuccino with whipped cream has 530 calories for 24 ounces. Again, go for regular coffee with skim milk.

ARBY’S
The sourdough sandwich with ham, eggs and Swiss cheese is a good deal — it has 450 calories, but you get a sizable amount of food — almost 9 ounces — so you should feel full until lunch. Skip the cheese to save about 100 calories.

FIT TIP: Don’t be fooled by the biscuit. At 230 calories it may seem like a good deal, but one little biscuit most likely won’t fill you up. Plus, adding just one pat of butter ups the total by 100 calories.

JACK IN THE BOX
At 290 calories, the Breakfast Jack sandwich (ham, egg and cheese on a bun) is a pretty good choice. You can even get away with the Meaty Breakfast Burrito, 6.5 ounces of food for 480 calories. It’s not the best deal out there, but for the amount you get — ham, sausage, egg and cheese — the calorie cost isn’t bad. As always, hold the cheese, sausage or bacon to trim the calories.

FIT TIP: While the Meaty Burrito is OK, be forewarned — the Extreme Sausage Sandwich breaks the bank at almost 700 calories. And steer clear of the Sausage, Egg & Cheese Biscuit, which, at almost 750 calories and 55 grams fat, can crash your #diet before you’ve finished your morning coffee.

HARDEE’S
A pancake platter at 300 calories is a decent choice, as long as you don’t smother it in butter. Hardee’s offers Butter Blend, which has only 25 calories a packet. Also watch out for the syrup at 90 calories per ounce. The Frisco Breakfast Sandwich — egg, ham and cheese on sourdough toast — is also a good option at 410 calories, as is the Sunrise Croissant with Ham at 430 calories and the Country Ham Biscuit at 440.

FIT TIP: Avoid all the Big Country Breakfast Platters, which run from 900 to 1,200 calories. Again, stay away from the hash browns — at Hardee’s they come in at 460 calories for a large serving.

EINSTEIN BROS.
The yogurt parfait is a great choice at only 220 calories for a 12-ounce serving. A Lower Carb 9 Grain bagel (210 calories) is a great low-fat alternative to muffins, cinnamon buns or doughnuts. Just make sure you go easy on the cream cheese, which packs about 70 calories for just two tablespoons.

FIT TIP: Scooping out the inside of the bagel can save you up to half the calories, and again watch the cream cheese and butter. Avoid the Spinach and Bacon Panini, which has 930 calories for 13 ounces and is just too much for breakfast. All the Frittata Egg Sandwiches are also very high in calories — most more than 600 calories. Try the frittata without the bagel and skip the cheese and bacon for a meal that’s high in protein and lower in fat.

SUBWAY
Subway has some decent breakfast options. Most of the breakfast sandwiches are in the 300-calorie range. You get your choice of bread, which can make quite a difference — steer clear of the 6-inch bread and go for the deli round instead, which saves you about 40 calories. Or even better, have your sandwich as a wrap and save around 90 calories. On any bread, the Western with Cheese and the Honey Mustard Ham & Egg are both good choices. As wraps they have only 310 and 230 calories respectively.

FIT TIP: Avoid the Chipotle Steak & Cheese and the Double Bacon & Cheese breakfasts (on any of the breads), both of which have over 400 calories even with the wrap.

JAMBA JUICE
Smoothies can be pretty healthy and very filling — but avoid those made with ice cream, whole milk or cream, nuts or peanut butter. The Strawberry Nirvana is a great deal at 160 calories for 16 ounces, and the vitamin-packed Powerboost comes in at 280 for 16 ounces.

FIT TIP: Watch out for the Peenya Kowlada at 460 calories, the Chocolate Moo’d at 500, and the Peanut Butter Moo’d at 540 (all are 16 ounces) unless they are all you’re eating for breakfast — in which case they could be fine.

FIT TIP: Smoothies are good options only if you are using them as a meal, not as a refreshment. But some smoothies (e.g. The Hulk Chocolate, 864 calories for 20 ounces) are in the 800-calorie range, which is too much even for a meal.