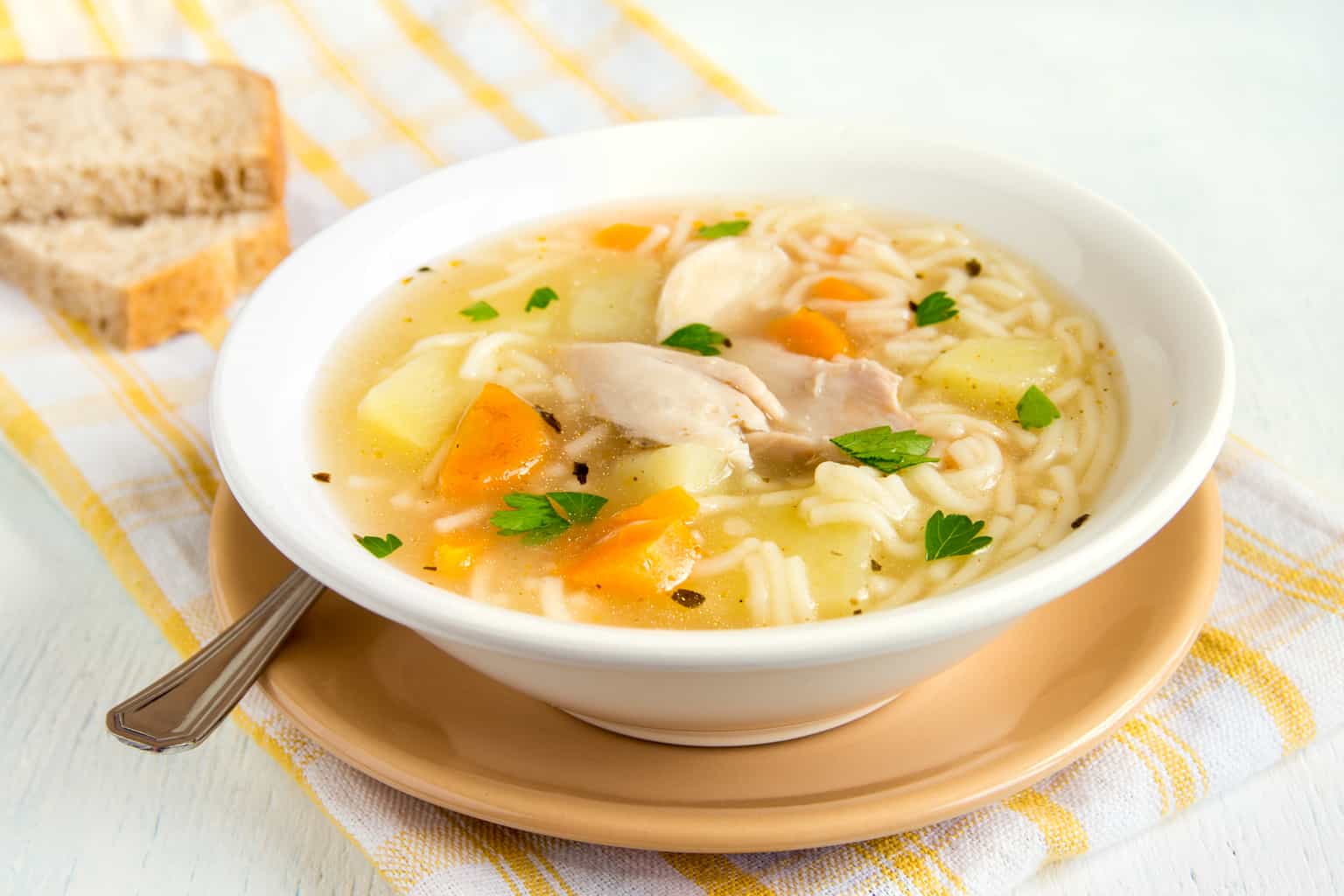 Well, first let’s talk about the #soup‘s overall #health benefits, which include significant amounts of vitamin A, vitamin C, vitamin K, vitamin B6, folate, potassium, manganese, antioxidants, a tremendous amount of fiber and — if you happen to be watching your weight — the ability to fill you up. Because soups have a water base, they tend to make you feel less hungry, and you eat less as a result. In fact, Barbara Rolls, Ph.D., professor of nutrition at Penn State University, led a study showing that eating soup prior to your meal could reduce your mealtime consumption by as much as 100 calories.

Now, in terms of chicken soup’s reputation as a cold and flu remedy — Moses Maimonides, a Jewish philosopher and physician, wrote about its healing properties as far back as the 12th century. In modern times, Stephen Rennard, M.D., a researcher at the University of Nebraska Medical Center, found that chicken soup contains a number of substances and has anti-inflammatory properties that may reduce the symptoms of upper-respiratory infections (including colds).

While Rennard and his team were not able to find the exact ingredients that created the effect of the chicken soup, they did find that the movement of neutrophils ­ white blood cells — was reduced, and, as a result, inflammation in the upper-respiratory tract that causes the symptoms of a cold was reduced. Of course, other researchers have theorized that the mere fact of inhaling warm steam while eating the soup raises the temperature of the airways and assists in relaxing secretions. And drinking liquids also helps to increase hydration, which in turn eases the symptoms of a cold.

So, without further ado, here is a fantastic #recipe for a healing chicken soup that I’ve been making and eating for years. Freeze a few quarts for a lazy, cold Sunday when you feel a cold or flu coming.

Wash and clean all #vegetables. Peal and cut off the tops and bottoms of the carrots, parsnips and turnips. Peal the garlic and onions, (or use already pealed garlic). Cut all the vegetables into 3 or 4 pieces. Wash the chicken breasts.

Fill a 12-quart, lidded cooking pot with 10 ½ to 11 quarts of water. Add all the ingredients except the salt and pepper to the pot and bring to a boil. Lower the heat, cover and simmer for approximately 3 hours. After about 2 hours, carefully remove the chicken breasts. Place the breasts on a large plate and remove and discard the skin and bones. Return the chicken to the pot.

After 3 hours, turn off the burner and let the soup sit, covered, for about 2 or 3 hours. Taste, add pepper and salt to taste, and refrigerate. The soup is best served the next day, so it has time to thicken and settle.

Parsnips: They’re sweet, low in calories and loaded with fiber. They’re also loaded with folate, which helps reduce the levels of homocysteine, an amino acid that, at high levels, can lead to artery damage. Low folate levels can lead to hyperhomocysteinemia, a risk factor for vascular disease, cancer and cognitive dysfunction. Parsnips are also a good source of vitamin C (which boosts the immune system), vitamin E and potassium.

Italian parsley: Loaded with vitamin K, as well as an excellent source of vitamins A (for eye health) and C. Parsley also contains the phytochemical myristicin, which studies have shown to inhibit tumor formation, particularly in the lungs. And it is a top source of the antioxidant flavonoid apigenin, which is said to protect the prostate.

Carrots: Packed with the antioxidant beta carotene, which may reduce the risk of heart disease and cancer and promote better vision.

Dill: Has calcium, iron and anti-bacterial properties. Dill also contains monoterpenes, which, according to the Journal of Nutrition, are said to have anti-tumor properties.

Celery: Although water accounts for more than 95 percent of its weight, celery is a good source of fiber and supplies modest amounts of antioxidants, vitamins and minerals. One cup provides 260 milligrams of potassium, 40 milligrams of calcium and 36 micrograms of folic acid. Celery is loaded with phytonutrients such as quercetin (which promotes prostate and brain health).

Garlic: A clove of garlic has 4 calories but packs a mighty nutrient punch. Garlic is an excellent source of manganese, a very good source of vitamins B6 and C and a good source of selenium. It is also said to have strong anti-cancer properties. The compound that produces much of the disease-fighting activity of garlic is allicin.

Onion: Onions contain more quercetin than any other common fruit or vegetable. This potent antioxidant has been linked to a reduction in the risk of heart disease, Alzheimer’s and a variety of cancers (such as prostate and lung cancer). Onions also contain phytochemicals, which are known for their anti-cancer and anti-microbial properties. And, according to researchers at the University of Wisconsin-Madison, they also show anti-platelet activity (platelet accumulation is linked to heart disease) and may protect against gastric ulcers by preventing the growth of Helicobacter pylori, a microorganism. Onions, like leeks, also contain inulin.

Turnip:A root vegetable that has calcium, iron, fiber and is high in vitamin C.

Leeks. They’re a good source of manganese, a trace mineral that plays an important role in the formation and maintenance of bone and connective tissue. Also, like onions, leeks contain the prebiotic fiber inulin, which can selectively improve the proportion of good bacteria in the colon that help to create a physical barrier to infection and have been linked to improved absorption of important minerals such as calcium and magnesium. Leeks also have the flavonoid kaempferol, which helps fight degenerative diseases such as cancer, diabetes, cardiovascular diseases and cataracts.

Broccoli: One of the healthiest vegetables on the planet. High intakes of broccoli and other cruciferous vegetables are linked to a lower risk of lung, prostate and colorectal cancer. Broccoli is also high in potassium, vitamin A, vitamin K and folic acid, all of which are vital to heart health.

The 10 Best Influencers for Nutrition