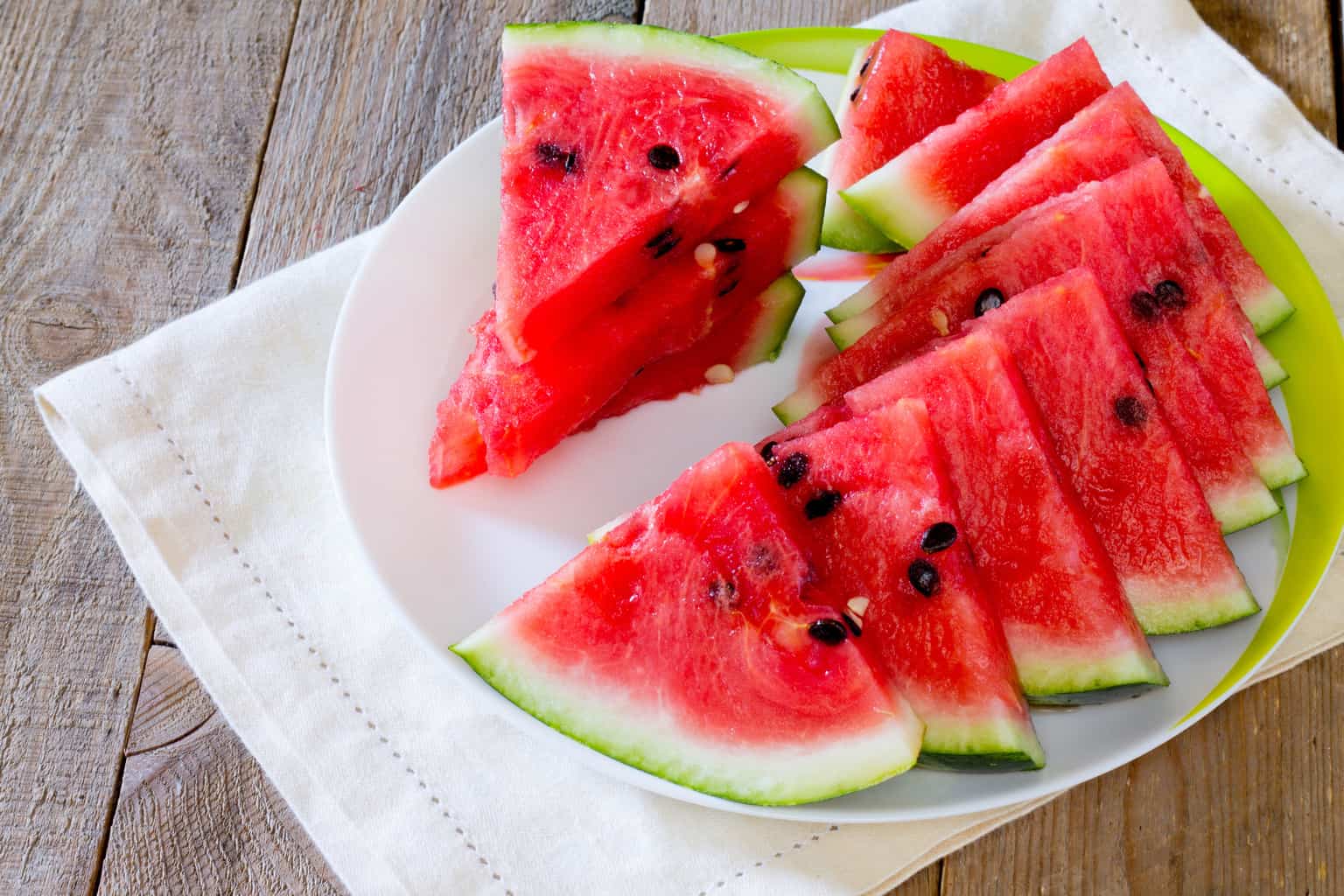 Health Perks: On average, watermelon has 7.5 to 10 milligrams of the antioxidant lycopene per cup — that’s about 40 percent more than is found in raw tomatoes. That’s because lycopene’s bioavailability is low when tomatoes are eaten raw, but it increases in heat-processed products such as tomato juices and sauces. Watermelons, however, don’t need to be heated in order to obtain maximum lycopene, which is believed to guard against heart disease and some cancers.

Plus, watermelon contains citrulline, an amino acid that creates arginine, another amino acid that recent research suggests may help reduce the risk of cardiovascular disease, stimulate the immune system and accelerate the healing of wounds.

Seek Out: Firm, juicy, red flesh without white streaks and skin without cracks, bruises or mold. The seeds should be dark brown or black. According to James Parker, associate global produce coordinator for Whole Foods Market, “Look for melons that have a uniform shape (not small on one end and larger on the other).

Ripe fruit will have a slight give on the end opposite to the stem, and most varieties will also have a slight yellowing of the rind on the lightest part of the outside of the melon. ‘Thumping’ a melon is not at all reliable. The best way to tell for sure that it’s ripe is to have your grocer cut a plug out of the fruit for you (a small triangle that will show you how the inside looks).”

However, some experts rely on the “thumping method” because oftentimes you won’t have the opportunity to cut a plug and peek inside. Peter Romano, the produce director at New York City’s famed Fairway Market, says that when you tap the melon in the middle with the palm of your hand, you should hear a hollow sound. Also, Romano suggests that if the watermelon is cut, it should have a thin rind and a bright, fire-engine-red color.

Avoid: If you have a chance to peek inside, (if the melon is sliced or if a plug is cut) avoid pale flesh, white streaks and whitish seeds. “And make sure there are no splits, veins, hollow pockets, dark red streaks or blood-red color (as opposed to an engine red color),” says Romano. The rind should be free of bruises, soft spots or mold. Also, avoid watermelons that are very hard, white or very pale green in color on the underside.

Storage: After it’s picked, watermelon doesn’t ripen very well. When unripe, keep it at room temperature. You can even try putting it in a large brown paper bag for a couple of days. According to chef and food expert Aliza Green, author of Field Guide to Produce (Quirk Books, 2004), ripe watermelon will keep best if cut up, covered with plastic wrap and refrigerated — it will last for about five days.

Interesting: Watermelon can also be considered a vegetable; it’s a relative of the pumpkin and squash family.

Why: They are so sweet, don’t raise your blood sugar levels and they are very low in calories considering the amount you get to eat.

Health Perks: Just one peach delivers 10 percent of your recommended daily intake of vitamin C and provides 2 grams of fiber — most of it as cholesterol-lowering soluble fiber. In addition, peaches have a low glycemic load.

Seek Out: According to Green, “You shouldn’t be put off by the fuzz, and make sure that the stem end is yellow or cream-colored. Also, look for a well-defined crease and a pleasingly sweet fragrance. They should be soft to the touch.” If you buy local peaches, especially from a producers-only farmer’s market, you can find tree-ripened fruit, which is especially important for peaches because they bruise so easily when ripe, adds Green.

Peaches have to be picked ripe, because they don’t sweeten up after they are picked; they only get softer, says Terri Clapsaddle, R.D., a North Carolina nutritionist and dietdetective.com adviser. They are best eaten within a few days of purchase at your local farmer’s market and are tastiest at room temperature.

The perfect peach should: Have a little “give” to it when you press the flesh very lightly, but should not be “mushy;” Should be a deep reddish-peach color for the most flavor; white flesh varieties will be a little lighter in color on the outside; Should have a wonderful “peach” smell to them

Avoid: “Make sure that the peach doesn’t have ‘green shoulders’ around the stem, suggesting premature picking. A deep red-brown color, softening of the fruit or shriveling of the skin at the stem indicates it’s over-ripe,” advises Green. Also, avoid large, flattened bruises or fruit that is too soft, green in color, or with any signs of decay. Never squeeze peaches: They will bruise.

Storage: Don’t store in the refrigerator or in sunlight. One of the better ways to ripen peaches is to place them in a brown paper bag, fold the top and leave them for a day or so. “When you can smell the peaches and they give just slightly, they’re ready to eat,” says Green.

Interesting: Peaches are originally from China, where they are considered a symbol of longevity. And get this — the peach is related to the rose. The top three peach-producing states in the United States are California, South Carolina and Georgia, in that order.

Why: One-quarter of a melon (about 15 cantaloupe balls) has only 70 calories or so, and there is nothing like a sweet piece of cantaloupe on a hot summer day.

Health Perks: Cantaloupe is low in calories, very low in sodium and virtually fat free. It’s also high in vitamins A and C and a good source of vitamins B6, B3 (niacin) and folate. Cantaloupes are high in the antioxidant beta carotene and in potassium, which is necessary for muscle contractions (including your heartbeat), transmission of nerve impulses and the delicate balance of fluids and electrolytes. Diets rich in potassium are known to lower blood pressure.

Seek Out: Fragrant, symmetrical melons that are heavy for their size, with a yellow or cream undertone and no visible bruises. The stem or blossom end should give to gentle pressure and smell sweet, says Green. “Another indicator with cantaloupes is the stem — if it still has one and it won’t come off easily, chances are it’s not ready to eat,” says Parker. Additionally, the netting or veining on the exterior of the melon should be substantial, coarse and corky. Finally, the skin color between the netting should have changed from green to yellowish-buff, yellowish-gray or pale yellow.

Avoid: According to Green, over-ripe cantaloupes have “lumps or soft spots.” Small bruises are OK, but avoid the ones with large bruises. She also suggests avoiding rock-hard or lopsided melons. Also, watch out for mold growth, which can indicate decay.

Storage: Uncut melons can be stored at room temperature for up to a week. Refrigerate cut melon in an airtight container for up to five days.

Interesting: The cantaloupes we eat are actually called muskmelons.

Why: They’re so good, filled with health benefits and oh-so-low in calories.

Health Perks: Fifteen cherries have only 64 calories and more than 10 percent of the daily value for vitamin C. They are also rich in vitamin E, contain 2 grams of fiber and are a good source of potassium, magnesium, iron and folate.

Cherries contain a pigment called anthocyanin (responsible for their distinctive red color), which is a type of antioxidant called a flavonoid. Flavonoids have been linked to a variety of health benefits — from potential protection against heart disease and cancer to keeping the brain sharp. The darker the cherry, the higher the anthocyanin content.

Additionally, cherries are one of the few food sources of melatonin, another potent antioxidant that helps improve the body’s circadian rhythms and natural sleep patterns. There is also some research to suggest that cherries may have anti-inflammatory properties and help to control diabetes.

Seek Out: A very dark color, which is the clearest indication of good flavor and maturity in sweet cherries. Surface sheen is also important. Dull fruit will often taste flat and over-ripe. In general, high-quality cherries are firm, red and have bright, lustrous, plump-looking surfaces with fresh-looking stems.

Avoid: Soft, shriveled or blemished cherries, which are indications that the fruit is over- ripe. Green also suggests avoiding cherries with dark or brittle stems. And, according to Parker, you should also avoid fruit that has excessive spurs (“bumps” that grow off the stem of the fruit) and doubles (a single stem that produces two cherries), as this is an indication that the flavor will be inconsistent (some tart, some sweet).

Storage: Cherries are more perishable than other fruits and should be refrigerated immediately after purchase. Sort them first, removing any that are soft or split, and eat those right away or discard them, says Green. Cherries can be kept fresh in the refrigerator for two to three days. Avoid placing them in the sun or warm areas because they soften quickly. Check the fruit occasionally and remove any that have gone bad. Wash the fruit before eating. You can freeze cherries (with or without pits) by rinsing and draining them thoroughly, spreading them in a single layer on a cookie sheet and placing them in the freezer. Once the cherries are frozen, transfer them to a heavy plastic bag.