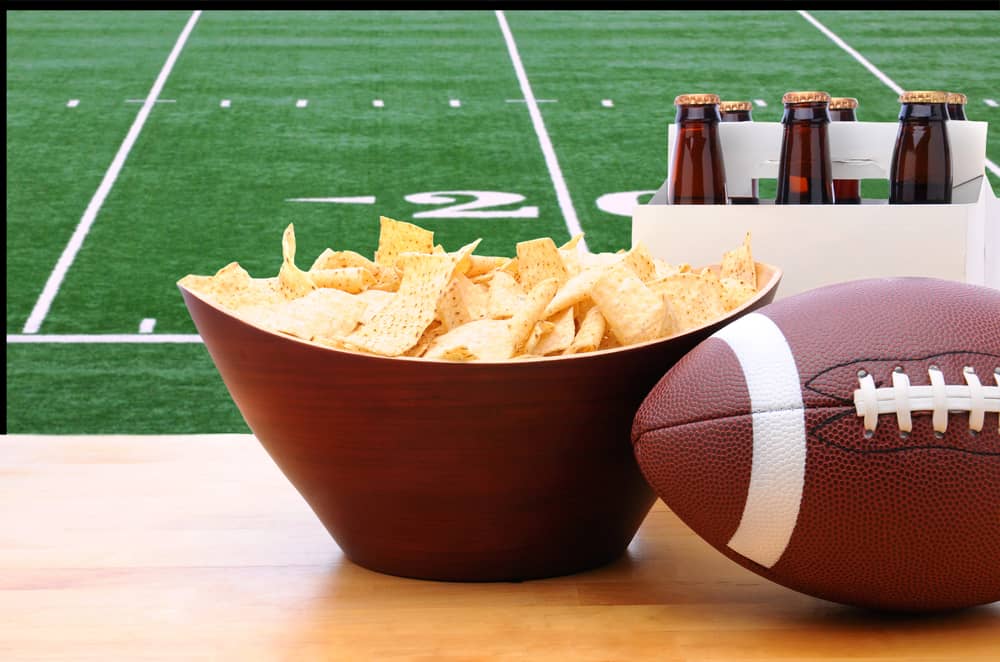 In order to give you some perspective, what follows are a few of your favorite Big Game foods and what it costs to burn them off. Yes, you can enjoy this one-day splurge; however, the concept helps to illustrate the cost of various foods in a language you can understand. So read on to make sure your choices are splurgeworthy.

Fit Tip: Skip the mayo and cheese and go for Subway’s Fresh Fit menu to cut half the calories.

JUST ONE (1) DORITOS CHIP = DANCING ALONG WITH BRUNO MARS TO “LOCKED OUT OF HEAVEN” DURING THE SUPER BOWL HALFTIME SHOW
You would have to dance to the entire song (if it’s played for about 3:54 minutes) to burn off just one Doritos chip, which has 12 3/4 calories. Imagine if you had a couple of handfuls (about 280 calories). It could even make you think twice while watching that fabulously cool commercial from the million-dollar winner of the Doritos Super Bowl ad contest.

Fit Tip: Look, if you have only ONE chip, I think you’re fine, but how many of you are going to have only one?  This is something you have to worry about anytime you open a bag of chips.  I would normally recommend lower-calorie chips, but the truth is, you’re better off nutritionally with something like pistachio nuts or roasted almonds, as long as you don’t have more than 20 of them. However, if you do have chips, don’t sit with the bowl (or bag) in front of you.

SIX (6) CHILI’S FAJITA BEEF CLASSIC NACHOS (LARGE) = RUNNING 242.5 #FOOTBALL FIELDS
Yes,  running 242.5 football fields; each of them is 100 yards, and you would have to run every one at an average speed of 5 mph (the average walking pace is approximately 3 mph).Six nachos is about half an order, and it’s no wonder the dish is calorie heavy.  The nachos are topped with three-cheese blend, black beans, jalapeños, beef and sour cream.

Fit Tip: You can lower the calories by using a low-fat cheese, chicken breast and skipping the sour cream.   Try this recipe from the BBC: http://www.bbcgoodfood.com/recipes/236612/homemade-chicken-nachos

FOUR (4) SWIGS OF BUD LIGHT BEER = 8 MINUTES OF PLAYING PROFESSIONAL FOOTBALL
Beer and football go together – it’s that simple. Taking just four swigs of Bud Light will cost you about 36 calories. The only problem is that, according to The Wall Street Journal, there are only about 11 minutes of “action” in a football game.  That means you need to play nearly an entire game of professional football to burn off those swigs.

Fit Tip: The best would be Beck’s Premier Light, at only 64 calories per 12-ounce bottle, or Miller64. Michelob Ultra and Natural Light each have 95, or you can go very low with Budweiser Select 55. Sample (very small sip) a few light beers before the game to see which ones you prefer.

SINGLE RITZ CRACKER WITH CHEEZ WHIZ = 21 MINUTES PREPARING, COOKING, SERVING AND CLEANING UP AFTER THE SUPER BOWL PARTY
Yes, that’s right, a simple Ritz cracker has 16 calories, and just a tablespoon of Kraft Cheez Whiz contains 45 calories, for a grand total of 61 calories in a single bite.

Fit Tip: Avoid the cracker altogether and cut up small squares of low-fat cheese — you really won’t notice the difference. In fact, you would probably eat cardboard if someone put it in front of you during the game.

ONE NEW YORK CITY PRETZEL = 111 MINUTES BEING THE TEAM MASCOT
New York City is the home of the giant hot street pretzel, weighing in at about 455 calories.  Burning that off requires wearing a silly suit and running around getting the crowd excited for almost two hours.

Fit Tip: Split the pretzel with two others.

FIFTEEN (15) PIZZA HUT BUFFALO BURNIN HOT CRISPY BONE-IN WINGS IN RANCH DRESSING = DOING “THE WAVE” 9,461 TIMES
About 1.2 billion wings will be eaten during Super Bowl weekend, according to the National Chicken Council.   They are 100 calories per wing, and the ranch dressing is costly at 220 calories per 1.5 ounces.

Fit Tip:  You can certainly make your own chicken wings. Go skinless and bake instead of deep frying them.

FOUR (4) TOSTITOS SCOOPS! TORTILLA CHIPS WITH GUACAMOLE = 133 TOUCHDOWN DANCES IN THE END ZONE
The chips are about 11 calories each, and each scoop of guacamole is at least 25 calories, for a total of 144 calories. Guacamole is high in calories, but the good news is that avocados are packed with antioxidants, vitamins B6, C and E, as well as folate and potassium (60 percent more potassium per ounce than bananas), and they’re a great source of monounsaturated fat, which studies have shown reduces serum cholesterol levels when used in place of saturated fats.

Fit Tip: Don’t sit with a big bowl of chips and guac in front of you while you mindlessly watch the game. For chips, the scoops are not excessively high in calories; however, Popchips (http://www.popchips.com/popchips/tortilla/#)  makes a nacho cheese tortilla chip that is only 7.5 calories per chip.

FIVE (5) PIGS IN BLANKETS = 36 MINUTES SELLING FOOD AS A STADIUM VENDOR
According to articles on Boston.com and in The New York Times, the average stadium vendor walks about 4 to 5 miles per game, up and down stairs, carrying a 40-pound bin. Wow, that’s a lot of work. Each pig-in-a-blanket is 67.5 calories for a total of 337.5 calories.

ONE CHEETOS CRUNCHY PIECE = 2 MINUTES OF CHANTING, POINTING AND WAVING A FOAM-HAND NUMBER ONE
Having only one can be costly.   Cheetos Crunchy Cheese Flavored Snacks
are 7.14 calories per piece, or 150 calories per ounce.

Fit Tip:  I wouldn’t dare suggest that you should get your crunch on with celery; however, try to limit eating with the game on and an open bag in your hand … it’s a bad combination.

Fit Tip:  Get thin-crust pizza with veggies and eat it for lunch, not just as a halftime snack.

ONE BOWL OF CHILI = 73 MINUTES OF CHEERLEADING
A 16-ounce bowl of chili packed with beef, beans and assorted vegetables comes to about 550 calories. A few tablespoons of sour cream and some shredded cheese on top add 150 calories more, for a grand total of 700 calories.

Fit Tip: Use ground sirloin or white-meat turkey, or make your chili vegetarian. Skip the sour cream and cheese or go for no- or low-fat versions.