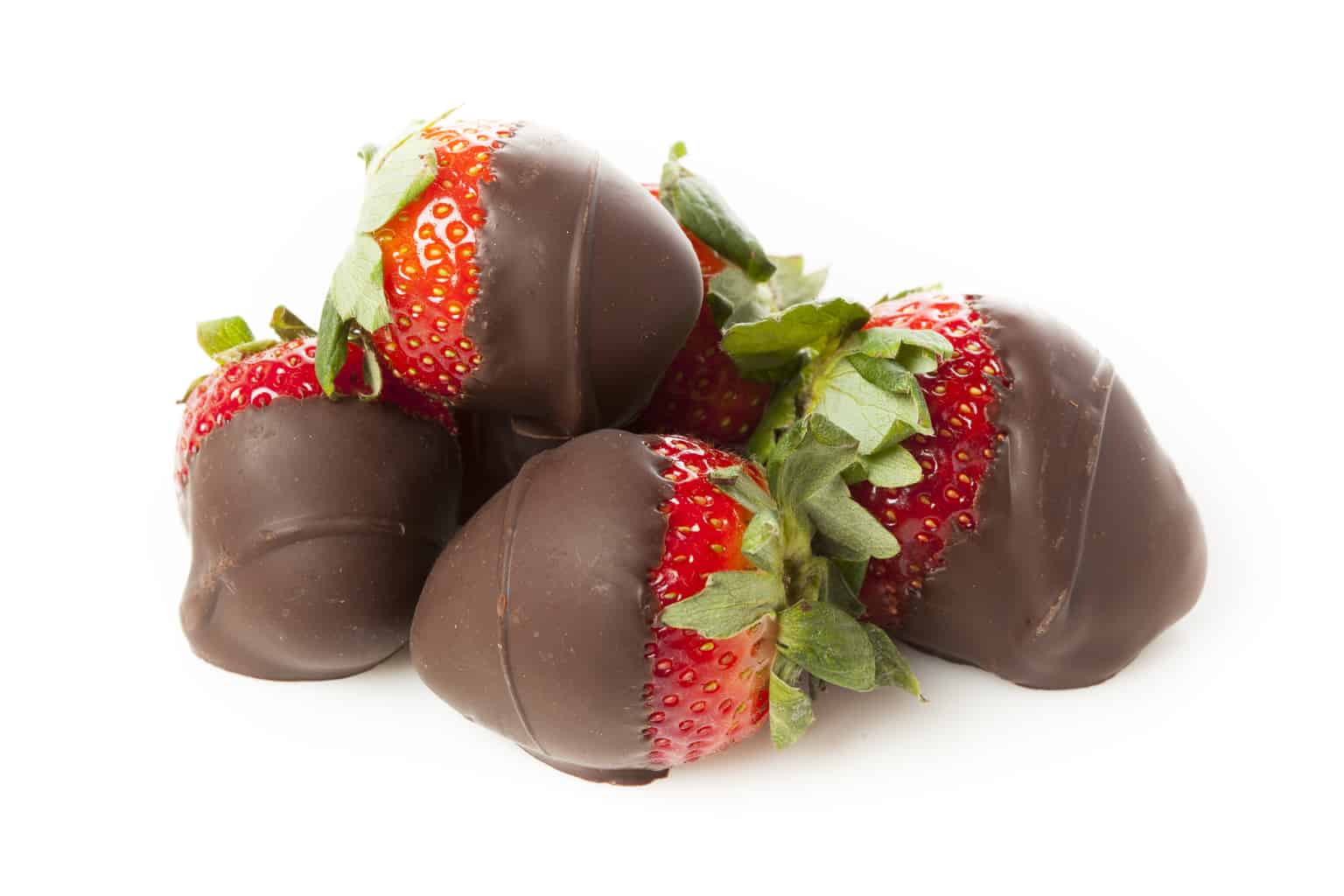 M&MS VS. RAISINETS
At first glance, there doesn’t seem to be very much difference. While M&Ms are slightly higher in #calories (1.7 ounces, 240 calories), you also get a little more in the package. But beyond the straightforward calories per ounce, there are some important distinctions between the two. M&Ms are 100% candy — bite-size pieces of milk #chocolate covered in colored sugar. Raisinets (1.58 ounces, 185 calories), however, could be considered a chocolate-coated health food. Much like dark chocolate, raisins are packed with flavanols, the phytochemicals that give cocoa its health power. So while the calorie counts may be similar, the health benefits of Raisinets make them a much better option. Junior Mints (one 1.84-ounce box, 210 calories) can also be a decent choice.

FIT TIP: In terms of chocolate candy, individual bags with tiny pieces seem to last longer than a chocolate bar and might, therefore, be your best bet. Just be sure to eat those tiny chocolate pieces one at a time; don’t empty the bag into your mouth all at once.

POWERBAR VS. HERSHEY’S SPECIAL DARK
Just because it comes in a sporty little wrapper with a slogan about strength, speed, endurance and muscle mass doesn’t mean a PowerBar isn’t just a candy bar with extra protein, vitamins and minerals. Yes, an energy bar has a few extra nutrients — but unless you’re a serious athlete, you probably don’t need one. On the other hand, eating dark chocolate (Hershey’s Special Dark) has heart-health benefits — but you can get the same benefits from tea or wine. The bottom line is that it’s fine to want a snack, but at least be honest with yourself: These are both snacks.

FIT TIP: Watch out for some of these “health” bars — the calories can creep up to the same as any candy bar. For instance, a single Clif Builder’s Chocolate Bar packs 270 calories, which is nearly equal to Snickers. If you’re looking for dark chocolate’s antioxidant power, have a Dove Dark Chocolate Bar (1.3 ounces, 200 calories). For the biggest antioxidant bang for your buck, go for Mars’ CocoaVia (80 calories, www.cocoavia.com), which is tasty and has been scientifically designed to pack on the heart-healthy flavanols. Or if it’s simply a chocolate treat you’re seeking, try a York Peppermint Pattie (1.4 ounces, 160 calories) or a Milky Way Lite (1.57 ounces, 170 calories).

GODIVA CHOCOLATE LIQUEUR VS. CHOCOLATE MARTINI
A chocolate martini, made with vodka, chocolate liqueur, cream and dark crème de cacao, averages more than 60 calories per ounce, with an average of 4-6.5 ounces per cocktail. On the other hand, Godiva liqueur is typically served over ice as 1- to 2-ounce drinks and averages 45 calories per ounce.

FIT TIP: Keep in mind that drinks have calories too, and they add up quickly. Alcohol also lowers your inhibitions, which makes you likely to eat more.

FIT TIP: How about dipping your strawberries into some delicious Jell-O Sugar Free, Reduced Calorie Chocolate Pudding? The entire container has 60 calories (for almost 4 ounces).

OREO CRUMBS VS. CHOCOLATE SPRINKLES
The calories in ice cream toppings add up fast — so pay attention. Choosing chocolate sprinkles (1.5 ounces, 38 calories) over Oreo crumbs (1.5 ounces, 218 calories) saves you 180 calories. Think of it this way: At 145 calories per ounce, your Oreo topping adds the same amount of calories as a half-serving of French vanilla ice cream.

FIT TIP: You can try dark Dolfin Belgian Chocolate Flakes at 75 calories for half an ounce — they are less sweet than other sprinkles, which helps curb the temptation to smother your ice cream in them, and you get the dark-chocolate health benefits. You can get them on the Web at chocolatesource.com.

SCHARFFEN BERGER DARK DRINKING CHOCOLATE VS. SWISS MISS HOT CHOCOLATE
Swiss Miss Milk Chocolate Hot Cocoa Mix has only 120 calories for a 3/4 cup (one-packet) serving, whereas the dark chocolate, while having the health benefits of real chocolate, has 210 calories for 1/2 cup if made with 1 percent milk. What about other chocolate drinks? Nesquik contains 200 calories per 8 ounces, while Yoo-hoo has 130. A can of Creamy Milk Chocolate Slim-Fast (about 11 ounces) comes in at 220 calories; however, it’s meant to be a meal replacement, not a drink.

FIT TIP: Hot chocolate made with nonfat milk has only 140 calories for an 8-ounce serving. Or you can make a low-calorie dark chocolate hot cocoa by mixing unsweetened cocoa powder with Splenda and skim milk. You can also go with Yoo-hoo Lite, which has only 70 calories for 9 ounces. Or, go for the pre-mixed Swiss Miss #Diet Hot Chocolate (one envelope prepared with water, 25 calories). It may kill your nighttime chocolate cravings for less than 30 calories!

CHOCOLATE SHAKE VS. BEN & JERRY’S CHOCOLATE FUDGE BROWNIE LOW-FAT FROZEN YOGURT Of course, low-fat frozen yogurt has fewer calories and is your best bet. But the calories can be pretty close: One cup of Ben & Jerry’s Chocolate Fudge Brownie Low Fat Frozen Yogurt has 380 calories. A 12-ounce McDonald’s Triple Thick Chocolate Shake is only a little higher at 440 calories, but it has none of the possible health benefits of yogurt.

HERSHEY’S KISS VS. RUSSELL STOVER TRUFFLE
Although the truffles — or any kind of boxed candy — are tasty and rich, they are very high in calories, averaging around 70 to 90 calories each. All these bite-sized candies come in large bags or boxes containing many, many mouthfuls. Given that most of us can’t stop at just one, consider exactly how many it’s going to take to satisfy your chocolate craving before you decide whether it’s a bargain. Even if you have just two dark truffles, that’s about 160 calories — equal to more than six Hershey’s Kisses (25 calories each).

FIT TIP: Tootsie Rolls (27 calories each) are a good bet because you have to chew them, which means they last longer, so you may be able to get away with just one. However, many sugar-free candies are just as high in calories as the regular versions. Hershey’s Sugar-Free Dark Chocolate Candy has about 35 calories per piece. And avoid those new “Bites” candies you can just pop in your mouth: Each one is about 10 to 14 calories, and they add up quickly. Also avoid mini Reese’s Peanut Butter Cups, which have 42 calories a piece.

CHOCOLATE-FROSTED BROWNIE VS. DOUBLE-DIPPED CHOCOLATE CUPCAKE VS. FLOURLESS CAKE
The cupcake (2.5 ounces, 240 calories) actually comes in a bit ahead of the brownie (2.4 ounces, 280 calories). Despite the current carb scare, flourless doesn’t mean healthy. In the case of flourless cake, it just means there’s much more butter, chocolate, eggs and sugar for about 390 calories per 3.2-ounce slice.

FIT TIP: While it’s not exactly front-and-center on the food pyramid, stick to an old-fashioned cookie to satisfy your chocolate bakery craving. You can even get fancy with a double chocolate chunk cookie and still save about 70 calories over a cupcake. Or try meringue cookies — some are even made with Splenda, so they’re fat-free and sugar-free. Miss Meringue Chocolate Cookies: 13 cookies for 40 calories (www.missmeringue.com).